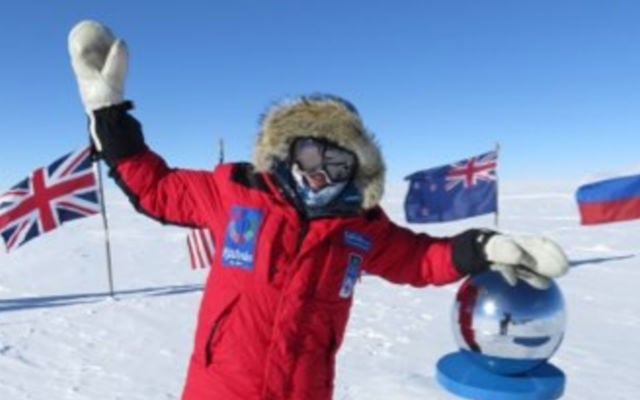 “What a journey, it feels amazing to be here,” Johanna Davidsson tells The Local from the middle of Antarctica.

The 33-year-old nurse arrived at the South Pole on skis from Hercules Inlet after 38 days and 23 hours – in other words, ten hours faster than the previous female record holder did it.

The journey, which was over 1,000 kilometres, finished on Christmas Eve.

“There have really been some ups and downs in this journey, but I was so glad to arrive here and not to have to ski anymore,” she says.

“And there is a chef here who will cook whatever I want.”

The Swede, who documented the trip on her blog, said that she hadn't actually planned to break the women's record, and had packed a heavy sled full of food.

“When you're having fun you don't notice the time, it was pure happiness that made me go so fast,” she said.

While she has missed Christmas at home (there's still the trip back to go, too), she says the thing she most looks forward to it is seeing her family again.

“And having a proper shower,” she adds.

So why didn't the Swede head to the North Pole, considering it's Christmas after all?

“The south pole is more interesting and not many people ski here. Plus there are no polar bear. And of course there's the fact that I don't believe in Santa Claus,” she says with a chuckle.

The Swede trained for the solo expedition in Norway and Greenland, a video of which can be seen below.

Davidsson is the first Swedish woman to make the trip alone.
She planted a flag at the pole that read: “Connect with your inner explorer”.
She now will begin the journey back to the coast, which she estimates will only take two weeks thanks to the help of a kite and favourable winds.