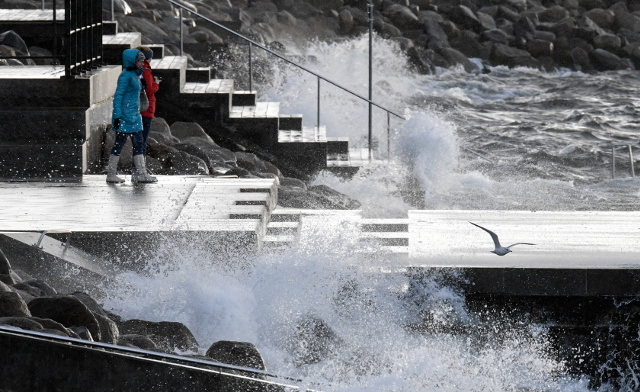 The Öresund Bridge between Malmö in Sweden and Copenhagen in Denmark reopened to traffic at 2.40am on Tuesday after closing at around 10pm the previous evening. Drivers were however warned to drive carefully and stay below 50 kilometres an hour on the 7.8-kilometre road bridge.

The water level in the strait separating the two countries rose to around 120-150 centimetres above average overnight, but national weather agency SMHI reported it was slowly subsiding in the morning.

SMHI downgraded its class-two weather warnings for southern Sweden to class-one in the far south and said gale-force winds were no longer expected for the rest of the Götaland region.

“The risk of strong gusts was over by around 4am or 5am,” SMHI meteorologist Johan Lundgren told news agency TT.

Several trains were still expected to be cancelled until 3pm on Tuesday on the following routes: Lund-Ystad/Simrishamn, Helsingborg-Simrishamn via Eslöv, Helsingborg-Hässleholm via Åstorp and Kristianstad-Karlskrona. Replacement buses will be in place, said operator Skånetrafiken.

Authorities in all three Scandinavian countries – Sweden, Norway and Denmark – had advised residents ahead of the storm to take precautions, including staying at home during the evening of the 26th and securing loose objects outside. However, the overall damages were not as bad as anticipated.

Fire and rescue services built sandbag barriers around the harbour and football arena in Halmstad, where the sea level was 175 centimetres above normal and residents in the region reported that the river Nissan had burst its banks.

Emergency services in Gothenburg were called out to a number of flooded basements and fallen trees and cars getting stuck on flooded roads were also reported across southern Sweden. 7

One Scandinavian Airlines flight from Reykjavik had to land at Bornholm island after twice being diverted – once from Copenhagen and once after being struck by lightning near Malmö Airport.

READ ALSO: 'There was a flash of lightning and people screamed'

Hurricane-force winds were measured off the southern west coast of Sweden on Monday evening at 33.8 metres/second (75.61 miles/hour). But no injuries had been reported by Tuesday morning.

“By around midnight we can conclude that Storm Urd has reduced in strength and that the strain has not been as great as what we expected. We had organized for a heavier burden,” Gothenburg Police spokesperson Thomas Andersson concluded.

The storm was named after the Norse goddess Urd, who is said to have spun life-giving threads for all living beings.