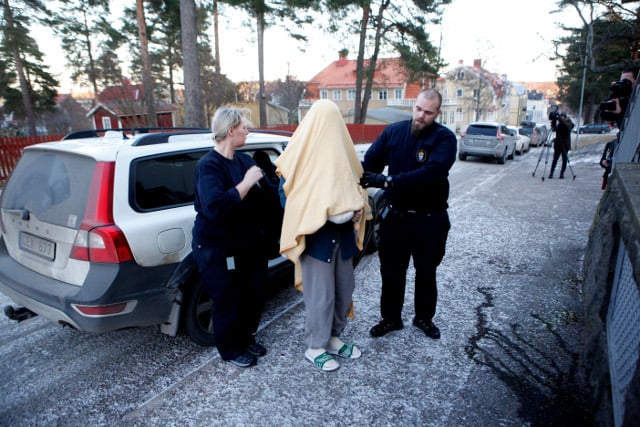 The suspect being led into court on Tuesday. Photo: Mats Andersson/TT

The man, who was remanded in custody by a district court on Tuesday, denies killing the 71-year-old woman and 62-year-old man in their rural home in Råbo north of Hudiksvall, central Sweden.

The couple were found seriously injured and died soon thereafter late on December 22nd. Police scoured the surrounding forest for the perpetrator and warned the public to steer clear of the area.

The man was arrested the following day when he turned up at hospital with an injured, blood-covered hand, after hitch-hiking there from the motorway. He told the court he had received the injuries after being robbed at knife point and did not seek hospital care sooner because he had fainted.

He is registered as living in the same county as the victims, but they are not believed to have had any previous connection.

According to reports in Swedish media, the woman is thought to have been wrapping Christmas presents when he arrived on their doorstep. A neighbour called the police after suspicious noises were heard from the house, reports regional newspaper Hela Hälsingland. The man claims he never left central Hudiksvall that evening, after missing the last bus home.

According to the prosecutor, however, he spent the night in the forest near the murder scene, hiding from police.

“What he did during this time we don't know, but he's been in the forest,” prosecutor Christer Sammens was quoted by the Aftonbladet tabloid as saying.

Earlier in the evening he went to the cinema in Hudiksvall to watch 'Rogue One: A Star Wars Story'. A cinema worker told the newspaper that the 20-year-old often visited the cinema and knew everyone who worked there. “He behaved just as usual,” said the unnamed staff member.

His friends told Aftonbladet that the man had previously sought psychiatric care, which has also been confirmed by his lawyer.

He was remanded in custody by Hudiksvall District Court on Tuesday afternoon, pending the ongoing investigation.