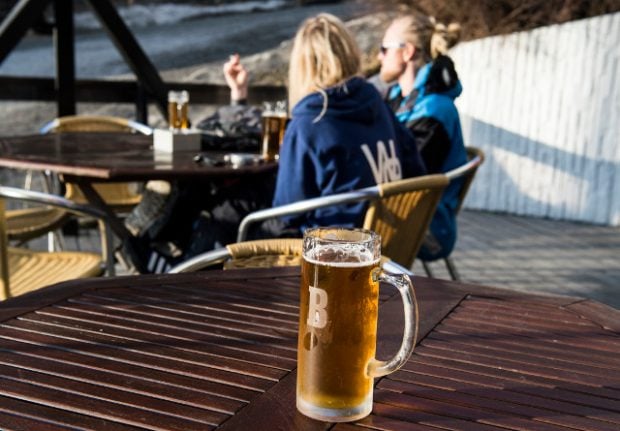 Are Swedes drinking too much alcohol? Photo: Pontus Lundahl/TT

The figures come from Sweden's Public Health Agency's national health survey, which interviewed people aged 16-84 in 2013-2016 about their health, and were reported by news agency Siren.

The report states that 19 percent of Swedish men and 13 percent of women drink alcohol in a way that could have harmful effects on their health, more than a total weekly consumption of 14 standard glasses of alcohol (containing 12 grams of alcohol) for men, or nine for women.

“It's such a large part of the population that we see it as a public health problem,” Pi Högberg of the health agency, Folkhälsomyndigheten, told Siren.

Most of the male drinkers are found in the Stockholm, Uppsala and Östergötland regions. Around 21 percent, or more than one in five, are in the risk zone. Among women, Stockholmers are the most likely to drink potentially harmful amounts of alcohol – a total of 16 percent according to the statistics.

“Most believe that the differences depend on culture and norms. It is still somewhat stigmatized for women to drink. Women with higher education and higher income tend to drink more, however. But we don't see that difference among men,” commented Högberg.

Previous studies have suggested that Swedish attitudes towards alcohol have become increasingly permissive over the past few years, with more and more people meeting up for a casual beer or two after work – a behaviour more typically associated with for example British or Italian culture.

However, other studies have shown that the proportion of alcohol drunk by Swedish high school students is at its lowest level in four decades.

Sweden has notoriously strict alcohol laws. Under Swedish law, alcohol is sold through the state-controlled monopoly Systembolaget and televised alcohol commercials are banned.