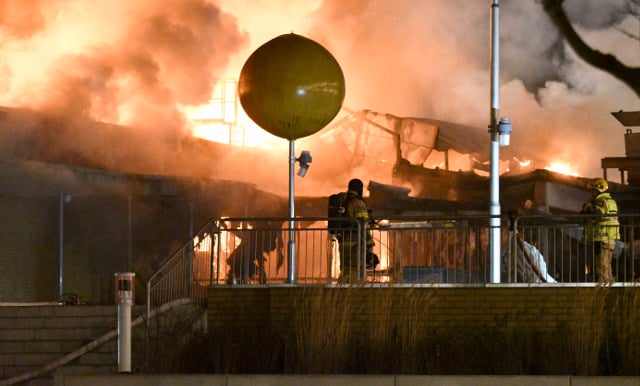 The pizza restaurant caught fire at 10.30pm on Tuesday, and firefighters worked extensively during the night to try to tackle it.

They were not able to prevent it from spreading however, and the building was destroyed. At 6am emergency services were still working to extinguish the last flames in the rubble.

A parking garage underneath the destroyed building survived. The fire was tackled by emergency workers from four fire stations, and police will not be able to start their technical work until at least one day after the firefighting work is completed.

“We will keep the place cordoned off as a suspected crime scene until the technical investigation of the area is complete,” police duty officer Hans Nilsson told news agency TT. Police are trying to establish the cause of the fire. When they arrived at the building on Tuesday the situation was disorderly, and officers were left in place overnight to maintain order.

“We had patrols left so that emergency services could work. Initially it was very rowdy, we had about 15 people there to keep track of those who were watching,” Nilsson explained.

“Koppargården belongs to one of our focus areas down here. Not everyone is friendly-minded, but as there were so many people we didn’t need to seize anyone,” he added.

Several Swedish tabloids have reported that the same pizzeria was targeted in an explosion last October. Police duty officer Nilsson acknowledged that the police have recurring problems in the area.

“It’s an area we have concerns with, like Rosengård in Malmö and Rinkeby in Stockholm,” he said.

Police have spoken to witnesses but hope to get more information in order to build a picture of what happened.