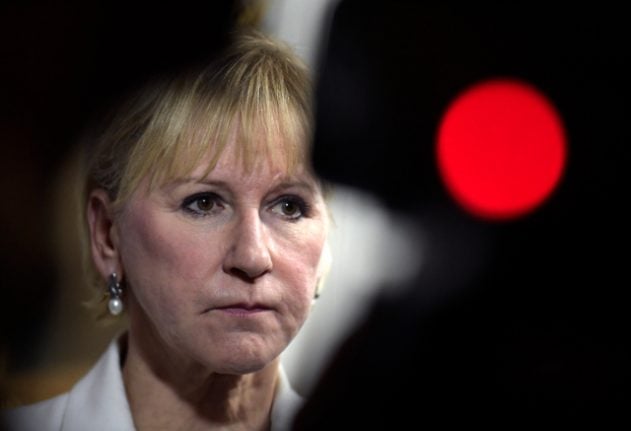 The Simon Wiesenthal Center (SWC), which is headquartered in Los Angeles, lists the Swedish minister's comments in eighth place in its ranking of the “ten worst global anti-Semitic/anti-Israel incidents”.

In first place is the recent UN Security Council resolution condemning Israeli settlement construction, which passed 14 to 0 after the US abstained rather than using its veto as it traditionally has done. The SWC singles out President Barack Obama for “facilitating” “the most stunning 2016 UN attack on Israel”.

In December last year, Wallström denounced a spate of Palestinian knife and car-ramming attacks against Israelis in a Swedish parliament debate and voiced support of Israel's right to defend itself.

However, she added (and a few weeks later called for an investigation into the deaths of those killed in the conflict): “Likewise, the response must not be of the kind – and this is what I say in other situations where the response is such that it results in extrajudicial executions or is disproportionate in that the number of people killed on that side exceeds the original number of deaths many times over.”

Israel responded angrily to the comments about “extrajudicial executions”. On a recent visit to the region, including Palestine, Wallström requested to meet Israeli officials as well but was apparently refused.

Between October 2015 and early December 2016, 242 Palestinians, 36 Israelis, two Americans, a Jordanian, an Eritrean and a Sudanese were killed, according to a count by the AFP news agency.

Most of the Palestinians were killed while carrying out attacks, Israeli authorities have said. Others were shot dead during protests or clashes, while some died in Israeli air strikes on Gaza.

In its ranking the SWC accuses Wallström, “whose consistently one-sided criticism of the Jewish State has outraged Israelis” of “worr[ying] about terrorists not their victims”.

It also notes that relations between Sweden and Israel have been strained for some time, mentioning Sweden's recognition of Palestine as a state shortly after Sweden's current centre-left government took office in 2014. “Relations between Israel and Sweden plummeted last year after [Wallström] attributed the Palestinian-Israeli conflict as a major reason for growing Islamist radicalism,” it adds.

A spokesperson for the Swedish foreign minister hit back at the centre on Wednesday.

“The list is clearly not serious,” wrote Erik Wirkensjö in an e-mail to public broadcaster SVT. “It mixes up anti-Semitism and criticism of the State of Israel's politics and puts President Barack Obama at number one.”

It is not the first time Sweden is featured in the SWC's annual rankings. Comments by Sweden Democrat politician Björn Söder were ranked the sixth most anti-Semitic in the world in 2014. It then also took a swing at Sweden for “failing to protect their Jewish citizens” from hate crimes.

The Simon Wiesenthal Center describes itself as “a global human rights organization researching the Holocaust and hate in a historic and contemporary context”.