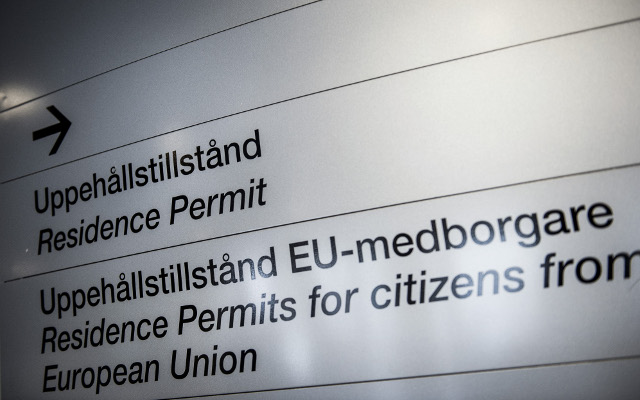 Some asylum seekers are not asked to do enough to prove their identities, Sweden's Interior Minister says. Photo: Marcus Ericsson/TT

“If you don’t have an identity document, I think the burden has to be placed clearly on the individual to prove their identity,” Ygeman told Swedish news agency TT in an interview.

An inability or unwillingness to show identity documents can hamper the assessment of whether an asylum seeker has grounds for protection, as well as whether they should be returned to their country of origin if the application is rejected.

In 2016 around 60 percent of asylum seekers in Sweden showed some form of identity document early in the asylum process.

“There’s an image which has been spread by traffickers and others that the best situation is to not have an identity, and that you shouldn’t have a passport with you. That’s a false image,” Ygeman noted.

The minister emphasized that according to Swedish and international regulations it should be very difficult for asylum to be granted to anyone who does not help to clarify their identity. And he is critical of how the regulations have been applied so far in Sweden.

“Basically it is the asylum seeker who is responsible for making an identity credible. That has come to be interpreted slightly differently in Swedish law, but it has to be the foundation,” he said.

Sweden's centre-right Moderates have backed Ygeman's call. Moderate migration policy spokesperson Johan Forssell said that his party believes too little responsibility has been placed on the asylum seeker, and the burden of providing proof has been reversed.

“The position is instead that it is the authority tasked with disproving the individual, we have seen that when it comes to determining age,” Forssell noted.

In September, Sweden decided to adopt a new model of medical age assessment for unaccompanied asylum seekers, which will do so by examining teeth and knee joints.

Sweden's Migration Agency (Migrationsverket) and police have suggested to the Swedish government that it should consider granting them new powers to help establish identities.

One proposal is for the police to be able to check telephones and computers to look for evidence of identity, as well as on social media. Being able to body search asylum seekers during the asylum process, as police in Norway can currently do, is another.

But Ygeman emphasized that those proposals are delicate, and that the government must analyze them before taking any position:

“There is a legal problem there because that could involve coercive measures against someone who is not suspected of a crime.”

“That shouldn’t be able to happen. You should only have one identity and that identity should be linked to biometrics like fingerprints,” Ygeman insisted.

Another proposal is for asylum seekers who do not cooperate in clarifying their identity to be made to disclose their whereabouts and have a fixed residence.

“Generally it’s reasonable for you to have a place of residence where you are, and for that to be known to the authorities. That applies to everyone else in society,” Ygeman concluded.

An established identity is a prerequisite if rejected asylum seekers are to be returned to their homeland. The Migration Agency estimates in its most recent prognosis that 88,000 return decisions will be taken during the period 2016-2018, half of which will return voluntarily.

Ygeman thinks it is important for the pace to pick up however, including in forcible returns:

“Primarily it is important to show that you can’t choose for yourself, as well as to encourage people to return voluntarily.”

So far in 2016 around 18,000 asylum seekers have returned to their home countries or another country from Sweden. Of those, 2,400 were returned by force.