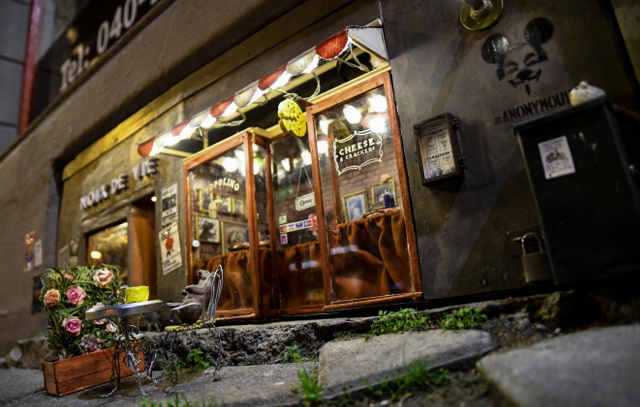 The restaurant and shop in happier times. Photo: Johan Nilsson/TT

Earlier in the December the anonymous artwork featuring a miniature, mouse-sized shop and restaurant appeared on a busy street in southern city Malmö, and it quickly gained international fame thanks to the hundreds of snaps posted on social media by locals revelling in the addition.

Created by artists known only as 'Anonymouse', the work soon took on a life of its own as Malmö residents started adding new details to it, including cheese, Christmas gifts and its own bus stop.

But on Thursday evening vandals apparently hit both the restaurant 'Il Topolino' and the shop 'Noix de Vie', breaking the windows and throwing some of the decor out onto the pavement.

At around 9.45pm the restaurant had been moved from its location, reported regional newspaper Sydsvenskan, adding it was unclear if it was a permanent move or just a temporary refurbishment.

“Since we do not know what happened, we have to assume that it is a gas leak from the kitchen that caused the damage. It is just unfortunate that Noix de Vie which does not have a kitchen has also been damaged. But a representative from Il Topolino says that they really will review their procedures,” the newspaper quoted Anonymouse as commenting in an e-mail.

Last week the creators told The Local that they were overwhelmed by the international attention, but promised that their next installation is going to be even better than the Bergsgatan one.

“Of course we feel the pressure for the next installment. But we're working on it day and night, so we're confident that it's gonna be even better than the previous one,” said representative 'Pärlan Mousekewitz'.

Read about some of Il Topolino and Noix de Vie's best moments here.