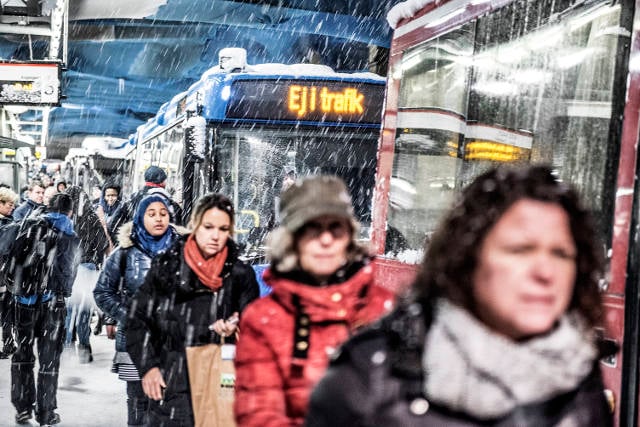 Snow is set to hit some parts of Sweden. Photo: Tomas Oneborg/SvD/TT

Forecasters in Sweden are certainly being kept on their toes at the moment. Temperatures reached 10.3C in Stockholm on the last day of 2016, the hottest end to a year there since 1859. Yet only a few days later, weather warnings for snowfall are being put in place.

National forecaster SMHI has issued a class one weather warning for snowfall of between five and ten centimetres on Tuesday evening in Östergötland, Örebro and Södermanland (the province which includes Stockholm).

Public broadcaster SVT’s in-house meteorologist Nils Holmqvist has even warned that the dreaded ‘snow cannons’ (better known in English as lake-effect snow) which struck the country in November could appear over islands Öland, Gotland and the Småland coast on Wednesday as winds pick up.

Temperatures are set to plummet too. Northern winds bringing colder air will cause the mercury to drop into negative territory, falling as the week progresses. In northern Norrland it could be minus 15-20 degrees on Tuesday, falling to as low as a chilly minus 30 on Thursday and Friday.

“In the north it’s going to get properly cold. On Tuesday it’ll be temperatures of between minus 15 and 20 in northern Norrland, that’s where the really cold air is,” SMHI meteorologist Lisa Frost told news agency TT.

Sweden’s furthest north is well accustomed to that kind of chill but other parts of the country likely won’t escape it either. In Svealand including the Mälaren Valley the temperature could feasibly hit minus 15 on Thursday night, and in southern Götaland, minus eight.

If that wasn’t enough, more snow is expected to move in from the northwest and fall across almost all of the country at the weekend. Best forget about the warm New Year’s Eve and bring the winter gear back out again.