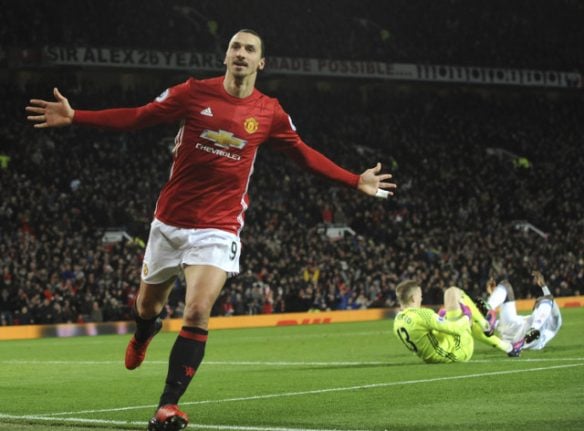 There were fears that, aged 35, the former Paris Saint-Germain star would struggle to cope with the ferocious pace of the Premier League.

But he has risen to the challenge in style, scoring 17 goals in his first 27 appearances for the club to keep United within sight of the Champions League places.

“I feel good,” he said in comments published by several British newspapers on Monday. “I don't know how many years I have left, but I am enjoying the football.”

“I came to the Premier League and everyone thought it would not be possible, but like always, I make them eat their balls.”

“It gives me a lot of energy, trust me, because they get paid to talk s*** and I get paid to play with my feet. That's how I enjoy it.”

“Every year they (Premier League clubs) have been calling me and it was not feeling good, so I wanted to come when everyone thought I was over.”

Ibrahimovic was denied what would have been his 51st goal of 2016 when he had a volley chalked off for a high foot during United's 2-1 win over Middlesbrough on Saturday.

Referee Lee Mason's decision meant Ibrahimovic failed to match Lionel Messi's tally for the year, but the former Sweden striker shrugged it off.

“Why he whistled, I don't know,” he said. “At first he gave the goal and after 30 seconds, he changed his mind.”

“There was not a lot to say to him because if you open your mouth, they give you a yellow. But I think I had a fantastic year. I'm not complaining.”

“I came to United and my first six months here have been more than amazing. That (the record) was not important. For me, the win is the same if I would beat Messi or not.”