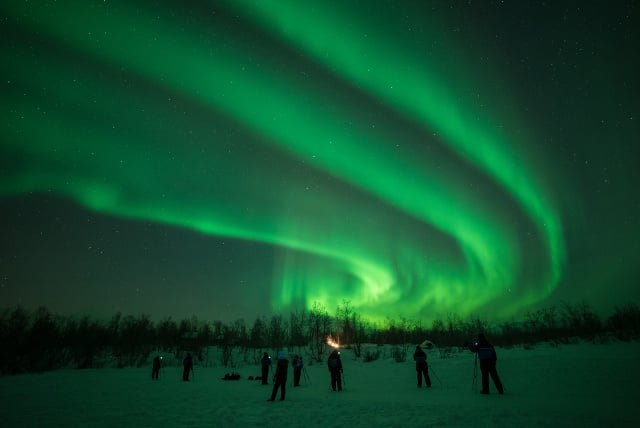 For those not already aware, the spectacular natural light show is caused when solar winds clash with the Earth's atmosphere, creating a green-tinged appearance in the sky.

Oliver Wright, a photographer who works for tour company Lights Over Lapland, was out with clients on Christmas Day in the Abisko National Park, situated 250 km inside the Arctic Circle and over 1000 km north of capital Stockholm.

The goal of the trip was to observe the Northern Lights at the park's Aurora Sky Station, and with the lights particularly bright that night it was achieved, but there was also a less expected development, when an odd sound started to emanate from nearby power lines.

Wright had noticed the noise, which resembles the sound effect attributed to the fictional blaster guns in Star Wars, on previous trips to watch the Northern Lights. When one of his clients asked about the sound on Christmas Eve, he was inspired to record it on his phone, the result of which can be heard here. The sound grew louder the closer Wright stood to a set of power lines, hinting at what was producing the noise, but not what caused the movement of the lines in the first place.

The answer, according to astrophysicist Dr. Tony Philips, could be a phenomenon called electrophonic transduction: the conversion of electromagnetic energy into mechanical motion.

“At the time of the Christmas aurora outburst, magnetic fields around Abisko were seething with activity. Strong low-frequency currents can literally shake objects, launching acoustic vibrations into the air,” Philips explained in a post on spaceweather.com.

“Wright may have recorded the unique sound of those power lines swaying in response to the magnetic storm,” he added.

As for the resemblance with the distinctive sound from the Star Wars movies, there’s a clear explanation: Star Wars sound designer Ben Burtt first created the effect by striking a wire attached to a radio tower with a rock.