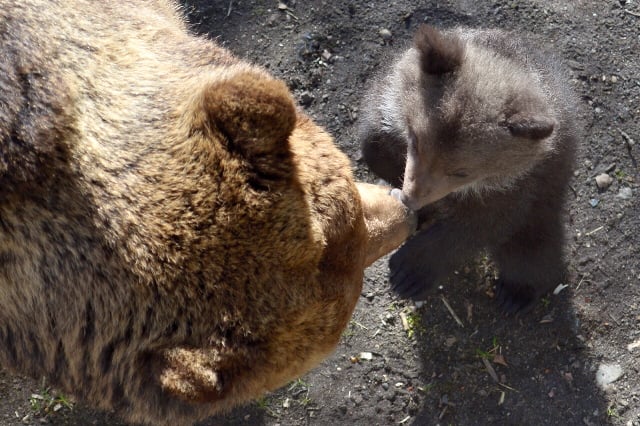 Happy New Year! You would like to think that the beginning of a new year marks the end of the dark Nordic winter months, but January and February are actually the coldest months of the year. New year, same weather. But it's not long until spring comes around, thankfully.

Even though February brings us one step closer to spring, the snow still stays on the tree tops and roofs in much of Sweden. So you just have to keep building snowmen until the little May flowers start to show. Keep an eye out for them!

Finally, March comes along and the spring slowly begins. The bears start to come out of their hibernation, some with their newly born bear cubs. That is something I'd like to see.

In April the temperatures start to rise and Easter is right around the corner. The weather is absolutely terrible and you should just not bother going outside. April Fools! The weather is mild, not too hot or too cold, so this is a perfect time to explore Sweden. At the end of the month Sweden celebrates Walpurgis Night, Valborgsmässoafton with big bonfires to “burn away the winter” and welcome the spring.

This shot is taken at one of my favourite places, Stockholm's Kungsträdgården park, during spring. In May, the beautiful pink cherry blossoms light up the park and everyone flocks around them to take pictures and admire their pretty colour. This is a must-visit if you're in the capital during spring.

School's out! But not only for schoolkids, did you know most workers in Sweden take five weeks off during the summer? Get out and enjoy the sun as much as you can before it disappears again.

July is that month when the sun never seems to set (and if you go far enough north, it doesn't) in Sweden. Here's a picture of an historic cottage in the Västra Götaland region. Time for a nap in the grass?

In August, summer break is over and for most, work or school starts again. But it is also the month of the 'crayfish premiere' when Swedes throw crayfish dinners (kräftskivor). Make sure you invite yourself to one.

Now the leaves start to change colour and it is time for hot cocoa and sweater weather. A nice time to cozy up in front of the TV with your family and a big blanket, or to go for a long walk on a sunny day. This is probably my favourite month of the year.

Spooky time. Sweden has adopted the American tradition of 'bus eller godis' (trick or treating). Pumpkin carving is fun too, but it can be quite a challenge. At least this one has a nice Swedish touch.

Why is this small creature out at such cold temperatures? November can be very unpredictable, with temperatures ranging from mild to freezing cold. Makes it hard to dress appropriately.

Did you know that Swedes serve rice porridge to Santa? This bowl, however, is for the gårdstomte, a mythological Swedish creature who lives in houses and on farms and keeps their residents safe.