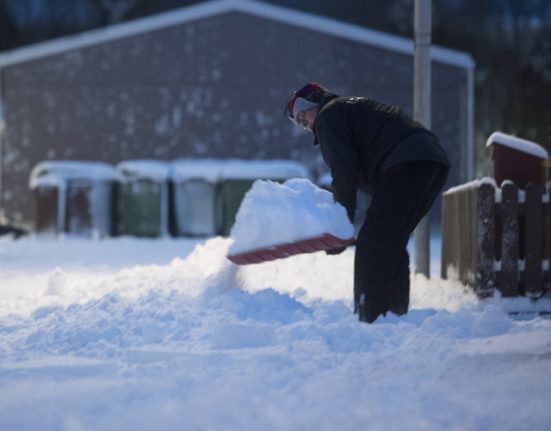 Naimakka in northern Lapland saw temperatures drop to at least -28.2C overnight, according to national weather institute SMHI. But much of the rest of Sweden also woke up to a frosty morning.

On Tuesday evening it was already snowing heavily in Stockholm, with around 10-20 centimetres of snow expected to have fallen by the morning. SMHI was not immediately able to say how much had actually fallen in the capital in the end, but said that 31 centimetres had fallen in Hälleforsnäs in Södermanland. All bus routes in central Stockholm, apart from the main ones, were cancelled in the morning, eventually operating at a reduced service a few hours later. Drivers across Sweden were urged to leave the car at home if possible.

“The problem is that the strong wind in combination with the snow could cause drifting, so if you are able to it is not a bad idea to stay indoors,” said SMHI meteorologist Mattias Burtu.

In Kiruna, many homes lost their heating on Tuesday night after a leak in the town's main system. The problem was fixed early on Wednesday morning. Police said no emergencies had been reported despite the outside temperature dropping to -27C during the night.

The snow and wind moved south later in the day, with class-two weather warnings issued for islands Gotland and Öland, as well as southern parts of the Baltic Sea and the Öresund strait.

“The weather is expected to be really difficult in those areas,” said SMHI's Burtu.

In some parts of southern Sweden the strong winds have caused water levels to rise. In Kalmar, the level is much higher than normal, leading to road closures and houses near the town's beach being flooded.

“It looks pretty terrible. Water is sitting in these beach houses and waves are hitting them,” Jesper Merby from Kalmar emergency services told news agency TT. SMHI warned that water levels could occasionally reach between 80-130cm above sea level on Sweden's south coast during the evening.

It has been a winter of extremes in Sweden. On December 31st it experienced its warmest New Year's Eve on record (10.4C in Eskilstuna and Adelsö). And a month and a half earlier Stockholm had its snowiest November day in at least 111 years.