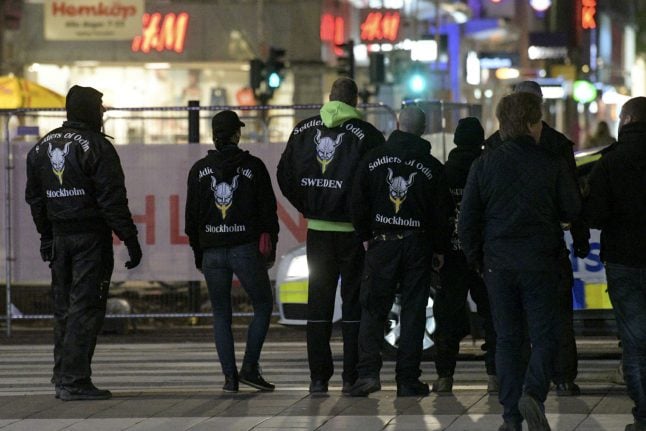 Soldiers of Odin in Stockholm in May 2016. File photo: Johan Nilsson/TT
Twelve people have been arrested on suspicion of aggravated assault.
The incident took place after right-wing extremist group Soldiers of Odin informed police Saturday evening that they would be patrolling through the town, reports news agency TT.
Soldiers of Odin, founded by Finnish Nazi Mika Ranta, has also conducted patrols in Uppsala, Gothenburg and Stockholm.
Several of its Swedish members have been convicted of serious crimes and Nazi sympathies, according to an investigation by Expo magazine.
Around 1:30am on Sunday morning, police received a number of reports of fighting between two groups in central Jönköping.
Between 15 and 50 people were involved in the fighting, according to the police, with a number of these armed with various types of weapons.
Twelve people were apprehended as a result of the violence and later arrested on suspicion of assault, Robin Simonsson of the Public Prosecution (Åklagarmyndigheten) press department told TT.
The fight was between members of Soldiers of Odin and left-wing extremist group AFA, according to the police.
“The left-wing movement in Jönköping has grown and this has made it more interesting for their opponents to be here. For some reason, they want to be in the same place,” said Lars-Göran Nilseryd, duty officer with Region East (region Öst) Police, to TT.
Information on social media suggests the fighting may have been prearranged, although police were unable to confirm this.
“We received information that Soldiers of Odin were going to patrol the town earlier in the evening, how we got that information I'm unable to say,” said Nilseryd.
Polise have also seized a number of weapons, but would not confirm the exact nature of these.
None of the individuals involved in the violence have been taken to hospital.
On its website, AFA recently published an overview of Soldiers of Odin's Jönköping operations, while the right-wing group has previously patrolled in the town.
“We know they are out there, we know that there are people who do not like them, and we know that confrontations can happen,” said Nilseryd.
Url copied to clipboard!