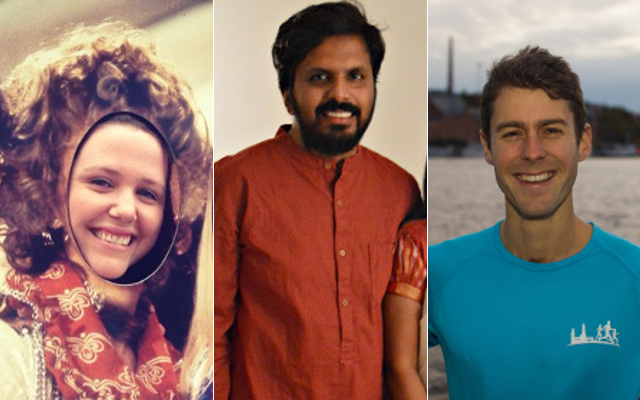 1. The outgoing Canadian working for an events and ticketing company

Shaena Harrison, originally from Winnipeg, Canada, was about to buy a house in her hometown when she decided to see the world instead. Now she's settled in Sweden and can't imagine life anywhere else. Read Shaena's story here. 2. The Indian IT worker whose homesickness inspired his startup

It's a long way from Kerala in the south of India to Älmhult in the south of Sweden (about 7300 kilometers to be precise) so when Renjith Ramachandran first moved to Scandinavia in 2008, staying in touch with his home comforts required a bit of effort. Read Renjith's story here. 3. The Australian who found his entrepreneurial path in Stockholm

Does: Runs a number of startups, including Run With Me Stockholm and The 100-Point Challenge

Dan Paech, 31, was only supposed to stay in Sweden for a few months. But then he moved into an unusual house, and when he looks back at how he went from enjoying a well-paid, comfortable job in Britain to running his own startups in Stockholm, the Australian is as surprised as anyone. Read Dan's story here. 4. The photographer who found the American dream in Lapland

Visiting Swedish Lapland was life-changing for Chad Blakley, who fell in love not only with his now-wife, but also with the landscape and the stunning natural phenomenon called auroras, or the Northern Lights. He now helps other people experience Abisko and what he considers to be Europe's last real wilderness. Read Chad's story here. Do: Run ecotourism retreat Stilleben in the small town of Åmot

Åmot could easily have become another ghost town victim of urbanization, were it not for the hard work of dedicated local residents and newcomers such as these two Belgians helping Sweden keep its countryside alive – by selling the concept of silence to stressed-out international tourists in need of a place to breathe. Read Sam and Jeroen's story here.