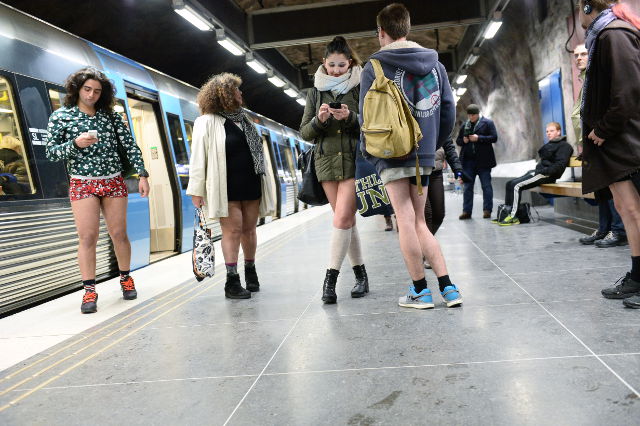 Men and women wearing their underpants and nothing over them suddenly appeared in the carriages of the city’s tunnelbana metro as part of the international “No Pants Subway Ride” event, which first took place in New York in 2002, before spreading across the world in the years since.

Temperatures dipped to as low as -6C in the Swedish capital on Sunday afternoon, but that didn't stop brave souls from turning out in their droves. Participants in the pantless spectacle then rewarded their bravery by finishing off the journey at a pub near the Fridhemsplan metro stop. It's all too much for one spectator. Photo: Fredrik Sandberg/TT Not an average Sunday in Stockholm. Photo: Fredrik Sandberg/TT

Since its beginnings in New York, the “No Pants Subway Ride” has spread to around 60 countries across the world.

The Stockholm incarnation first occurred in 2009, and despite the chilly weather its January date often produces, it has been going strong in the Swedish city ever since. “Some people wondered if we were protesting the weather,” a participant mused to The Local following the 2014 edition, where temperatures dropped to a chilly -10C.