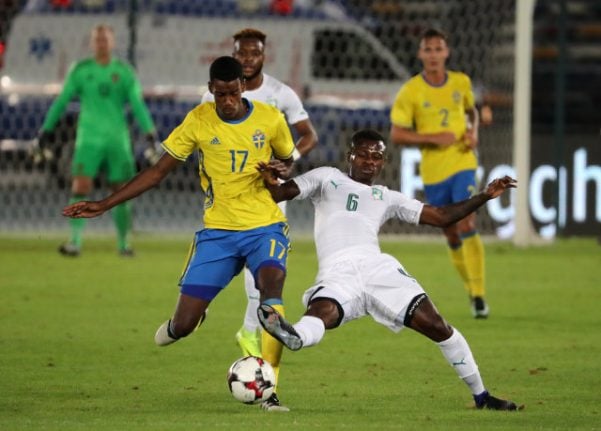 Alexander Isak in action during his debut against Ivory Coast. Photo: Adam Ihse/TT

Alexander Isak came on as a substitute in a 2-1 friendly defeat to Ivory Coast on Sunday. Aged 17 years and 109 days, he is the youngest player to take the field for the Sweden men’s team in 106 years.

Isak  – who plays in Sweden for AIK but has been linked with a move to numerous top European clubs – entered the fray in the 62nd minute of the friendly in Abu Dhabi.

“It was quite a tricky situation (with Sweden on the back-foot for much of the game), it was a defensive game, but it's good, it was still cool,” he told the newspaper Aftonbladet.

Real Madrid are reportedly leading the chase to snap up much talked about talent Isak.

Sweden are crying out for someone to replace talisman Ibrahimovic, now 35, after he quit international football in the summer following the Euros in France.

Gunnar Pleijel is still the youngest Swedish international in history, playing against Finland in 1911 at the tender age of 17 years and 72 days.