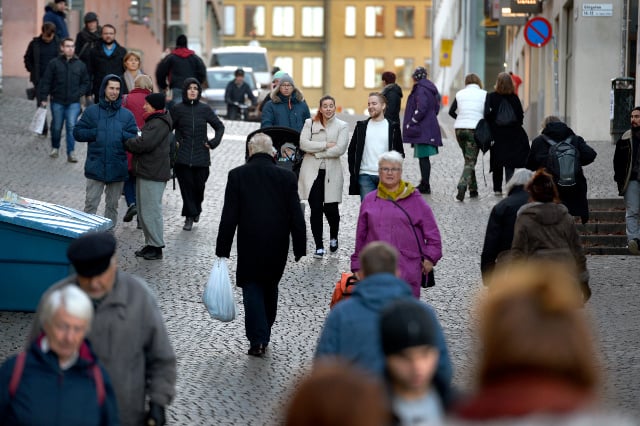 The Swedish National Council for Crime Prevention's annual survey on safety in Sweden found that 30 percent of people born outside of Sweden feel unsafe when they go out at night.

Of people born in Sweden to foreign-born parents the same figure was 20 percent, compared to 17 percent among native Swedes who have at least one parent also born in the country.

The figures have increased on last year, when 24 percent of foreigners in Sweden reported feeling unsafe, compared to 13 percent of Swedes with one or two Swedish-born parents. However, if you go back ten years, the numbers have dipped slightly in both categories.

Ten percent of foreign-born people told the survey they feel so unsafe that they choose to stay at home in the evenings, compared to six percent of native Swedes with Swedish parents.

The survey also indicates a notable difference between men and women.

A total of 31 percent of women said they felt unsafe going out at night – up from 25 percent in the 2015 survey. Twelve percent said they choose not to go outside in the evenings as a result, compared to two percent of men. Again, however, compared to ten years ago the numbers have gone down slightly.

Sara Westerberg, one of the authors behind the report, told The Local that increased debate about sexual offences when the survey was carried out may have affected the results.

“We see that women are significantly more worried than men about abuse/assault, and it is possible that that affects their perceived safety. The data collection was also carried out at a time when there were a lot of discussion about sexual abuse/assault of women and that too may have affected their sense of security,” she said.

Brå's director-general Erik Wennerström urged decision-makers to take the results seriously. “This means a door shuts them out from part of their lives. They get a serious restriction of their freedom of movement that nobody should have to feel,” he told newswire TT.

Interior Minister Anders Ygeman said he wanted to step up work to crack down on sex crimes.

“We need better criminal legislation which the government is to propose, we need to increase the risk of detection, for example camera surveillance in areas exposed to crime and more police in these areas,” he told TT.

“Feeling unsafe is complicated and whether you have the grounds to feel unsafe is nothing we can answer because it is very individual. The actual risk of being subjected to crime is small, but it doesn't just have to be about that risk, for example young men are most often the victims of assault but are at the same time the group that is the least worried about that type of crime,” said Westerberg, but added “no matter the reason it is important that concerns are always taken seriously”.

The group leader of the Feminist Initiative Party in Stockholm described it as a “security problem and a democratic problem” that 12 percent of women said they felt too unsafe to go outside in the evening.

Anna Rantala Bonnier urged authorities to in the short term make sure that public spaces are built with people's safety in mind, with enough lighting, movement of other people and few areas hidden from view.

“But the common factor is that nearly all violence in public spaces is committed by men, so in the long term we also need to talk about how women are viewed, masculinity norms and crime prevention measures,” she told The Local.

Around 12,000 people were interviewed for the survey, which was carried out between January and May 2016.