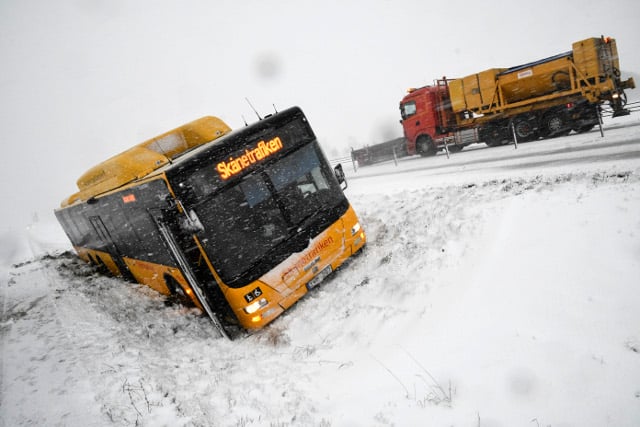 A bus which came off a road in Skåne, southern Sweden. Photo: Johan Nilsson/TT

National forecaster SMHI has issued class-two weather warnings (the second most serious on a scale from one to three) in both the north and south of the country, highlighting “very challenging” conditions.

“A certain amount of snow is going to come at the same time as the wind. That combination means it can get very challenging,” SMHI meteorologist Sandra Andersson told news agency TT.

Västernorrland and Västerbotten in the north are covered by the warnings, as are Halland on the west coast and parts of both Jönköping and Kronoberg.

“The snowfall area is coming in from the west and continuing east. It has reached Götaland, Svealand and Norrland and there are therefore many warnings across several different parts of the country,” Andersson explained.

Class-one warnings (the least serious on the scale from one to three) for gales, high water levels and snowfall are also in place across stretches of Sweden’s coast, as well as Dalarna, Örebro. Kronoberg, Jönköping, Värmland and Skåne.

A number of road accidents occurred from Wednesday lunchtime onwards. In western Skåne, at least two double-decker buses were blown off the E22 road. No one was seriously injured. Between 10 and 15 centimetres of snow is expected to have fallen in some areas before the end of the day, which when combined with the strong winds, creates a problem for traffic. Several trains and ferries in southern Sweden have been cancelled as a result.

“When it’s very windy there is a risk that trees fall onto tracks and power lines, and therefore the trains risk being stranded without power. You don’t want to put passengers through that, for the sake of safety you therefore don’t run trains on sections you know are susceptible to strong winds,” Agneta Eklund from Sweden’s transport administration (Trafikverket) explained.

In western Sweden, several trees have been brought down over roads, while on the Öresund Bridge between Sweden and Denmark, the speed limit has been reduced to 50 km/h due to the strong winds. Larger vehicles likely to suffer in strong winds have been advised to avoid the crossing.