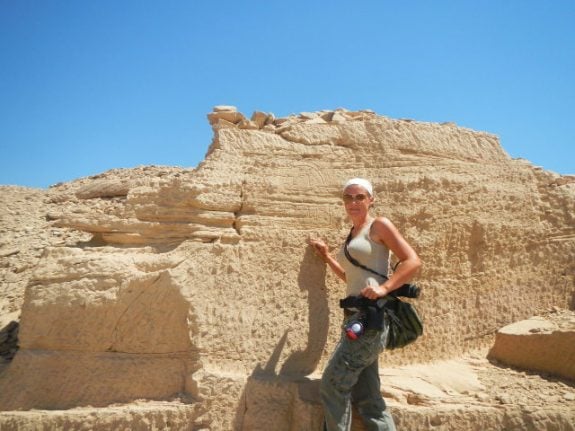 Swedish archaeologist Maria Nilsson pictured on a previous dig in the same area in 2015. Photo: TT

The finds were made near Aswan in southern Egypt, following nine years of excavation on a seasonable basis. The international team was led by Lund University archaeologist Maria Nilsson.

The grave site is situated at a quarry a few miles north of Aswan, not far from the location where the same research team made a high-profile discovery of ancient sandstone sculptures in 2015.

The graves are carved into a rock face and are made up of one or two chambers. They are from the earliest part of the New Kingdom of Egypt period which stretched between the 16th and 11th century BC, and those buried there were probably members of the upper middle class.

Some of the graves have not yet been opened by the team, but two of the ones which have been contained intact remains of infants, while a cat has also been found.

Swedish archaeologist Nilsson’s dream is to be able to open a large tomb with adults inside which has not been plundered over the around 3,500 year period in which the burial site near the Nile has been used.

“You wrestle with a sense of frustration about what the looters brought about, above all before the 1900s,” she told news agency TT.

Graves at the site which were plundered during years gone by have since been flooded by the Nile.

“Sand, silt and animals have bothered those graves and made them a mess of skeletons, ceramics, sand and junk,” Nilsson explained.

“They didn’t bother with chests, necklaces or pearls. The question is whether there were precious metals that are now gone. All indications point to that.”

The deceased were buried in the tombs together with their personal belongings, like jewellery or drinking cups. Amulets which were occasionally put on bodies as protection were also found during the excavation.

Some of the finds could be exhibited at museums, including the major archaeology museum in Luxor.