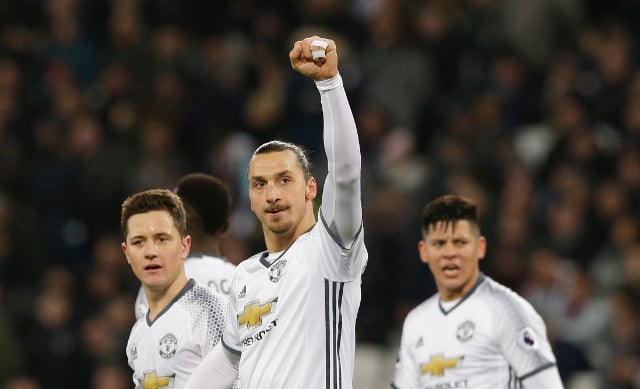 Despite critics claiming Ibrahimovic would struggle to adapt to the Premier League, the Swedish forward has already scored 18 goals since joining United on a free transfer from Paris Saint-Germain last year.

Ibrahimovic has netted 13 times in the Premier League and the 35-year-old has only one goal less than Chelsea striker Diego Costa, who is currently the division's leading marksman.

But the former Barcelona, Juventus and Inter Milan star insists he doesn't care about winning the race to finish as top scorer because his impressive first half of the season has been the perfect response to his doubters.

And, having won the league title in Italy, Spain, France and Holland, he is looking to add a Premier League medal to his collection.

“I'm chasing the head trophy, the Premier League. That is my aim,” Ibrahimovic told United's website on Thursday.

“The individual things come as part of the main objective because that is like a bonus for every individual player. If the collective does well, then the individuals will do well.”

“I try to help the team and try to do what I'm best at, scoring goals, playing good and creating chances for my team-mates. As long as I can do that, I know I will help my team.”

“The same thing with them, they help me the way they can for the team. I have no individual targets because that I did already, after three months in England. I conquered England – it took three months.”

Ibrahimovic, who is set to return after illness to face Liverpool on Sunday, believes United are finding their feet under José Mourinho following a shaky start to the Portuguese coach's Old Trafford reign.

United are unbeaten in 15 games in all competitions and have won their last nine in row, with Ibrahimovic continuing to thrive to such an extent that England forward Wayne Rooney has found himself marginalized for much of the campaign.

“I said from the beginning – slowly, slowly, we will get better and everything was about the click. We needed to click as a team. Now you see the identity of the team,” Ibrahimovic added.

Ibrahimovic is adamant sixth-placed United can still make a strong challenge for the title, despite trailing leaders Chelsea by ten points.

“The last one-and-a-half months have shown the right way. The gap has been bigger but now it's better, so we are closer to that now,” Ibrahimovic said. “We wait for the other teams to have their dips, to make their mistakes, and we will be there.”