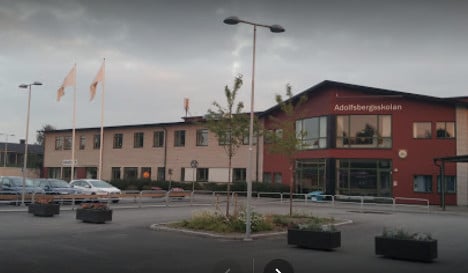 Adolfsbergskolan is separating girls and boys for a few weeks. Photo: Google
When students in classes 9c and 9d at Adolfsberg School in the city of Örebro returned after their Christmas holidays, they found that their classmates had changed so that they were only studying with students of their own sex.
Their parents then received a letter informing them that for the next six weeks their classes would be divided into “a class consisting of girls and a class consisting of boys” for all subjects apart from science, according to the local Nerikes Allehande (NA) newspaper.
Adolfsberg School’s headmistress Anneli Widestrand told The Local that there had been a “misunderstanding”, arguing that it was wrong to to see the single sex groups as actual classes, as the sex segregation would only last “a few weeks”. It was better seen as a one-off intervention to “strengthen knowledge development” among certain pupils.
She told NA that the separation aimed “to test new ways to meet students on an individual basis”. “I think it's a good way to break the pattern, to reach students,” she said.
She said her long experience as a teacher had taught her that some girl pupils did not dare to speak or break negative behaviour patterns when surrounded by boys.
But the students were nonetheless largely opposed to the move.
“If I had wanted to go to a girls' school, I would have done it, but that’s impossible anyway. They closed in 1974,” one of the students, Beata Ejdeholt, told NA, which employs her mother as a journalist.
“People are very unhappy and upset. We have questioned it and students have written about it on Instagram. We have raised it several times but they just say that some girls think it is difficult to give presentations in front of some guys.”
Sweden’s Schools Inspectorate last year ruled that an Islamic school in Stockholm had the right to separate boys and girls for PE lessons, triggering a debate in Swedish society.  As a result Education Minister Gustav Fridolin said he aimed to bring in new regulations to prevent gender segregation.
There is some evidence however that both boys and girls perform better academically in single sex classes.
A study of British schools carried out by education data analysts SchoolDash found that pupils studying in single sex state schools received significantly higher exam results in 2016 than those in mixed schools, with 75% percent getting five good GCSEs compared to 55% in mixed schools.