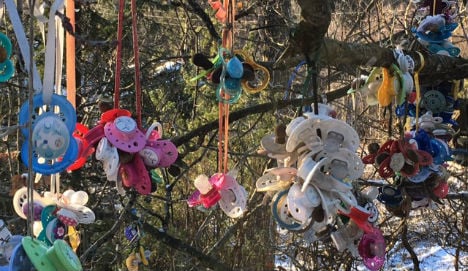 The dummy tree in Floda has been popular for three decades. Photo: Sandra Hjerling
Ulla Hjerling, 65, was working as a kindergarten teacher in the village of Floda near Gothenburg when she had the idea of hanging a one of her class’s dummy (pacifier) on a tree as a farewell ceremony to help her stop using it.
Three decades later, the idea has spread worldwide, with hundreds of pacifier trees now drawing families and children across Sweden, Denmark and Norway, and others springing up in the past decade in places such as Brooklyn, New York and Northville, Michigan.
“Everyone calls me the nappmamma [dummy mummy],” Hjerling told The Local. “Me and my husband are there to look after the trees and pick them up when they fall down, and we go and pick up the string when the wind blows it down. The dummies shouldn’t be left on the ground.” Hjerling said the idea had come to her when a girl in her school was finding it extremely difficult to leave her dummy behind.
“I just invented it. We were just in the wood and we just hung up the dummy there,” she said. “I had heard of anyone else who did it before did it, so I think maybe I started the first nappy tree in the world.”
She believes that the emotions children invest in their dummies makes it extremely important that they are disposed of sensitively.
“For the child it’s very important, to have a dummy which you love. We should take it seriously,” she said. “We should respect children for the small people they are. You can’t just throw the dummy in the rubbish.” She said that many parents brought all their extended family to their dummy-hanging ceremonies in the forests of Floda.
“They bring coffee and sometimes all the grandparents are there, and the child hangs it up in the tree, and the child is the centre of attention, and they feel very proud to say farewell to their dummy, and everyone is happy when they go home again. It’s a lot of fun.”
Hjerling is still in touch with the girl whose dummy was the first to be hung. She is now mother to three children and working as a nurse.
“Many of them are big today, and they think it’s really fun to be able to come and visit their dummy,” Hjerling said.
When Ulla Hjerling is not able to visit the trees, her daughter Sandra, who lives in Floda picks up the dummies which have fallen to the floor and restrings them.