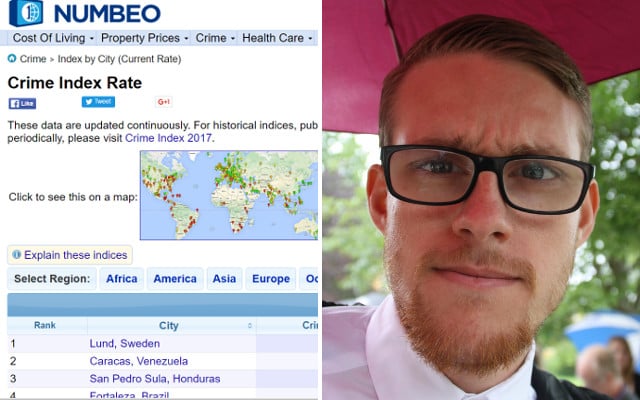 The southern Swedish city, known for its cathedral, university and quiet cobbled streets, is currently ranked top of website Numbeo’s “Crime Index Rate”, ahead of the likes of Caracas in Venezuela and San Pedro Sula, Honduras. A screengrab of Numbeo's ranking on January 17th, 2017. Photo: Numbeo

That’s all thanks to Linus Trulsson, who was inspired to make it happen after seeing stories being spread on Twitter about crime in Malmö, based solely on figures from Numbeo.

“(Journalist) Kolbjörn Guwallius wrote on Twitter about how dubious sites use it (Numbeo) as reliable data,” Trulsson told The Local.

“I built on that, choosing Lund as a city to push up in part on the basis of it having few previous ‘reviews’ (12 at that stage) and in part because of the eternal rivalry between Malmö and Lund.”

According to the Swedish National Council for Crime Prevention’s (Brå) most recent breakdown of crime figures by municipality, Lund saw 13,197 crimes reported per 100,000 residents in 2015 – below the national average of 15,342.

Numbeo’s ranking of crime-ridden cities is not based on confirmed stats. Instead, it is based on ‘reviews’ left by users of the site, making it easy to quickly build an image of a city, as Trulsson illustrated.

He gave Lund the worst possible ranking in all of the review categories, multiple times, and soon had the desired result.

“It is easy to shape public opinion towards a particular case, above all if you have similar-minded people behind you,” he noted, citing an example on Twitter which, using Numbeo’s rankings, claims that Malmö is the second most crime-ridden city in Europe. It has over 100 retweets.

A tweet claiming Malmö is the “second most crime-ridden city in Europe” using Numbeo as a source. Photo: Twitter

“Numbeo should hardly be considered stats, it’s more like reviews. Anyone, anywhere in the world can change the data, as many times as they want. Completely anonymously. I managed to make Lund the world’s ‘most dangerous city’ in less than a day,” Trulsson warned.

The Swede was careful to point out that there is a difference between easily manipulable databases and reliable sources, which do exist in his opinion.

“A lot of mistrust is growing, above all on the internet, towards official authorities and the media – unjustified in my opinion. A lot would need to be revealed for my faith in authorities and their statistics to sink to the level that I begin to question them,” he concluded.

The issue of unreliable information has been a high-profile one in the last year as it was brought to the fore during the US election, and Sweden is no exception.

Earlier this week The Local reported on how popular Swedish children's cartoon Bamse will soon teach kids about the dangers of fake news and the need to be critical of sources in two new comic books.