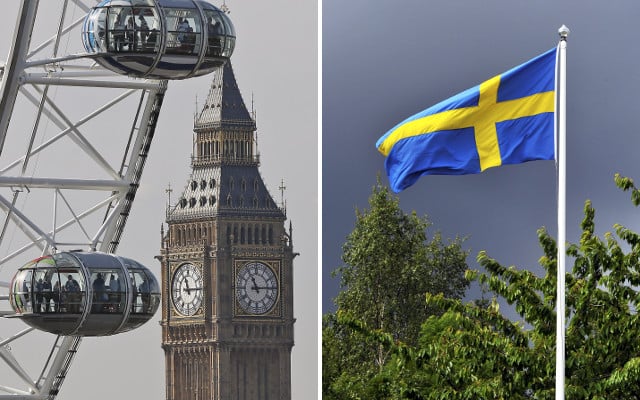 The Local spoke to Swedes in the UK about living there after the Brexit vote. Photo: Frank Augstein/AP & Hasse Holmberg/TT

READ ALSO: Swedish minister reveals stories of xenophobia against Swedes in the UK

With that in mind, The Local spoke to Swedes in the UK to find out first hand how their lives had changed following the June vote, if at all. Here's what they had to say.

Tanja Hansson, who lives in Birmingham, has had a mixed experience. Living outside of London in a city which narrowly voted to leave the EU, she has been able to find out what motivated those who opted to depart the union.

“Because I’m not in London I think I see it a bit differently – the majority of people I know, colleagues, my boyfriend and friends voted to leave the EU and none used immigration as their argument,” she told The Local.

So far she has only experienced one negative incident related to the vote.

“On the day of the vote my neighbour knocked on the door and asked if I had voted, to which I answered no. She got angry then and said she voted to leave because of people like me who take their jobs and houses,” she said, adding “of course that made me upset but she’s the only person who has said or done anything like that”.

“At work I’ve only had support from the bosses saying I won’t lose my job.”

Nicklas, a Swede living in London who The Local previously spoke to in the immediate aftermath of the Brexit vote, said that his experience since has been one of uncertainty:

“There have been short-minded Brits saying ‘you were worried about the vote but everything is fine!’ when we have to remind them the process hasn’t even started yet. It’s a long procedure where every non-Brit is waiting to see what will happen to us.”

And there is now talk of alternatives to the UK for launching a career abroad, he explained:

“My friend had an interview at a big American investment bank who informed him that his role and the whole department will move to Frankfurt in 2018. He joked that it’s now important for Swedes who want a career in the UK to work on their German…”

Planning for the long-term as an EU citizen in the UK is a tricky business at the moment, he added.

“My friends who have been here between one and five years no longer have a plan. We’re stuck in limbo. If you own a flat, you’re looking to see how the market is and if you can sell it. I was offered a car renting scheme at work the other day but I can’t plan for the next three years. I just hope I still want to be here by the end of 2017.”

Fellow London resident Jessica Svenningsson said she too is avoiding long-term plans for the time being, but life had generally not changed otherwise.

“For me personally, things haven't changed that much, and I haven't noticed any changes in attitude towards me,” she said.

“I'm however not doing any long-term plans right now, as I don't know how Brexit will impact me in the future. I'm taking things as they come and I'm waiting until there are more definite answers to what will happen to us EU citizens living and working in the UK.”

“I don’t agree with Ann Linde’s picture, but it is maybe because I’m younger and in principle only socialize with people who are under 25,” she noted, adding that age may play a part in the kind of behaviour Swedes in the UK are exposed to.

“Many Brits in London under the age of 25 are frustrated that the Brexit vote happened, so I think that young people are not as vulnerable,” she concluded.

Therese Ramstedt argued that discrimination towards Swedes should not be a particular concern, and that rather, the preferential treatment she feels Swedes receive in the UK is more of an issue.

“I have never felt discriminated or overlooked as a Swedish person, neither professionally or outside of work. After Brexit this is something that has actually started to make me uncomfortable – that somehow I, as a Swedish person, am exempt from the discrimination that migrants from many other EU countries are subjected to,” she explained.

“I don’t like the idea that it should be particularly outrageous that Swedish people are discriminated – this relates back to why I despise Brexit as a concept, it has somehow validated nationalism and cultural hierarchy at a time the world really needs to unite rather than divide,” she added.

For Ann Liljas, Linde's visit was a welcome one, though she feels the Swedish minister should also visit Swedes in other parts of the UK:

“I think she should try to visit Swedes in other parts of England and Wales too as they may have more trouble.”

Liljas said she had personally heard stories of xenophobia in the aftermath of the Brexit vote, but stressed that she didn't think Swedes in particular were being targeted.

“A few months ago my husband’s colleague was on a train to work in south-west London. She was texting another Swede and the guy next to her must have noticed they were writing to each other in a foreign language. As she was about to get off the train the young man she had been sitting next to told her to leave the UK and move back to her home country,” she detailed.

“She got really upset and replied she had probably paid more tax in the UK than he. As she got off the train second later several people in the carriage started applauding her for telling him off. In this case, I don't think the guy could tell her nationality but was against immigrants in general.”

Hundreds of billions of euros and counting have been shelled out since Russia invaded its pro-EU neighbour in late February.

Governments have gone all out: from capping gas and electricity prices to rescuing struggling energy companies and providing direct aid to households to fill up their cars.

The public spending has continued, even though European Union countries had accumulated mountains of new debt to save their economies during the Covid pandemic in 2020.

But some leaders have taken pride at their use of the public purse to battle this new crisis, which has sent inflation soaring, raised the cost of living and sparked fears of recession.

After announcing €14billion in new measures last week, Italian Prime Minister Mario Draghi boasted the latest spending put Italy, “among the countries that have spent the most in Europe”.

The Bruegel institute, a Brussels-based think tank that is tracking energy crisis spending by EU governments, ranks Italy as the second-biggest spender in Europe, after Germany.

Rome has allocated €59.2billion since September 2021 to shield households and businesses from the rising energy prices, accounting for 3.3 percent of its gross domestic product.

Germany tops the list with €100.2billion, or 2.8 percent of its GDP, as the country was hit hard by its reliance on Russian gas supplies, which have dwindled in suspected retaliation over Western sanctions against Moscow for the war.

Spending to continue rising
EU countries have now put up €314billion so far since September 2021, according to Bruegel.

“This number is set to increase as energy prices remain elevated,” Simone Tagliapietra, a senior fellow at Bruegel, told AFP.

The energy bills of a typical European family could reach €500 per month early next year, compared to €160 in 2021, according to US investment bank Goldman Sachs.

The measures to help consumers have ranged from a special tax on excess profits in Italy, to the energy price freeze in France, and subsidies public transport in Germany.

But the spending follows a pandemic response that increased public debt, which in the first quarter accounted for 189 percent of Greece’s GDP, 153 percent in Italy, 127 percent in Portugal, 118 percent in Spain and 114 percent in France.

“Initially designed as a temporary response to what was supposed to be a temporary problem, these measures have ballooned and become structural,” Tagliapietra said.

“This is clearly not sustainable from a public finance perspective. It is important that governments make an effort to focus this action on the most vulnerable households and businesses as much as possible.”

Budget reform
The higher spending comes as borrowing costs are rising. The European Central Bank hiked its rate for the first time in more than a decade in July to combat runaway inflation, which has been fuelled by soaring energy prices.

The yield on 10-year French sovereign bonds reached an eight-year high of 2.5 percent on Tuesday, while Germany now pays 1.8 percent interest after boasting a negative rate at the start of the year.

The rate charged to Italy has quadrupled from one percent earlier this year to four percent now, reviving the spectre of the debt crisis that threatened the eurozone a decade ago.

“It is critical to avoid debt crises that could have large destabilising effects and put the EU itself at risk,” the International Monetary Fund warned in a recent blog calling for reforms to budget rules.

The EU has suspended until 2023 rules that limit the public deficit of countries to three percent of GDP and debt to 60 percent.

The European Commission plans to present next month proposals to reform the 27-nation bloc’s budget rules, which have been shattered by the crises.