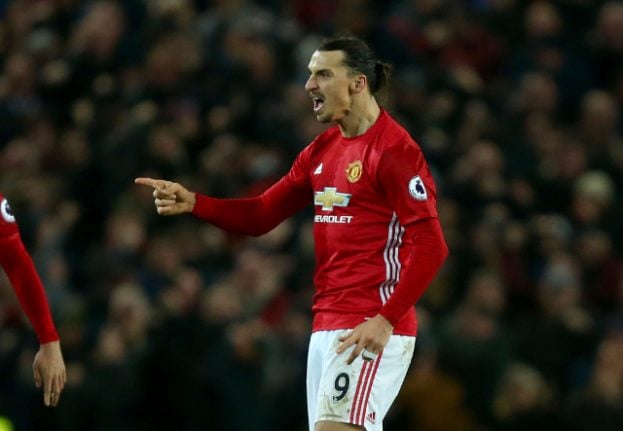 The 35-year-old striker – who has defied the sceptics who thought he was too old to flourish at Manchester United but has scored 14 goals in 20 Premier League appearances – said the pressure he placed on himself was so immense because nothing less than winning counted.

Ibrahimovic, who joined United in the close season last year after a hugely successful period at French champions Paris Saint-Germain, scored United's equalizer in Sunday's 1-1 draw with Liverpool which ended his side's six-match winning streak and leaves them 12 points behind leaders Chelsea.

“I really want to do not perfect, more than perfect, every game, even in training. I'm not happy if I don't win in training so imagine what it's like in the games.”

“That is the pressure I put on myself and so your pressure becomes like a kindergarten for me.”

“My pressure is really high. I'm not satisfied until I get what I want. What I want is to win.”

Ibrahimovic, who retired from international football following a disappointing Euro 2016 finals, defended team-mate and the world's most expensive player France midfielder Paul Pogba who was slammed for his below-par performance against Liverpool.

Ibrahimovic said although he did not know Pogba that well he felt he could handle pressure to.

“Pressure is something I enjoy,” said Ibrahimovic. “I don't know Paul personally to be able to answer that for him. But I think he likes it also because, without pressure, we would not be on our toes at the top level.”

“If you want to play at the top, pressure is 24 hours, and if you play well or better the pressure becomes even greater.”

“So it's something that we learn from and something we have to handle because we belong to the top, Paul belongs to the top absolutely and the pressure will be there.”

Pogba's poor performance came on the day the Old Trafford hoardings promoted his #Pogba Twitter hashtag – Ibrahimovic admitted it was easier when he started playing as social media was not part and parcel of life.

“I think football is like that today. With the social media, the media building up the game,” he said.

“When I started to play football there was no social media, none of these things.”

“But it's part of the game now. What is too much, what is too less? We don't know. We just follow the game. We are professional, we train like always, try to do our best every game.”

Ibrahimovic suggested the reason the game passed Pogba by is that the game was not really played in midfield.

“For Paul, the game was different. It was a dirty game, in the way we had to play more direct, by jumping over the midfield because the pressure liverpool put on us was hard.”

“It was difficult. The first game against them was the same. The guys told me every game we play against Liverpool.”