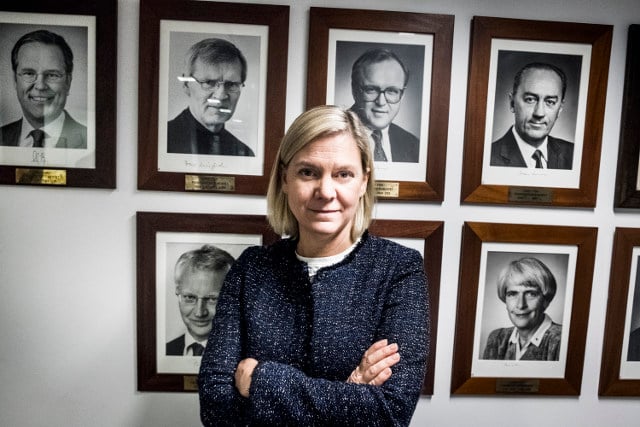 “Equality is on everyone’s lips and has become the new ‘black’,” Andersson commented, adding in a Facebook post later that the 'Swedish model' is “hotter than ever”.

During events at the international meeting both she and Löfven hammered home the message that a better distribution of income is necessary for progress.

“More and more are opening their eyes to equality’s importance for sustainable development, bringing society together and for growth. Both the IMF and OECD have highlighted that there is a link between a more equal distribution of income and growth,” Löfven said.

We need global unifying project: “Sweden went from europes poorest in 1900s to one of richest. We created equal society too” @Stefan_Lofven

The Swedish PM’s goal during the conference is to try and convince decision-makers from other countries as well as major companies that closing gaps and increasing equality is the best antidote to the rise of populism and protectionism exemplified by Donald Trump’s election in the USA and the UK’s vote to leave the European Union.

In a debate on the positive and negative consequences of globalization, Löfven argued that the key to creating a strong society is optimism in the future, and in order to ensure that optimism, it is important to make sure those with lower skills are also given good opportunities.

“People must in general feel like there is the promise of a better future, that I can promise my kids a better future than the one I had,” he insisted, adding that everyone should be offered the possibility of not only a basic education “but also life-long learning in order to be able to keep up with changes”.

Löfven also touched on Brexit negotiations, saying they will be “very, very, very difficult,” and emphasizing that Sweden will be pragmatic during the process.

The Swedish PM stated his belief that if the two-year time scale for the UK’s withdrawal from the EU is to be kept then negotiations must be completed as early as next autumn.

“That’s a very, very short time for these complicated negotiations,” he noted, adding that both the UK and others need to think carefully about the process.