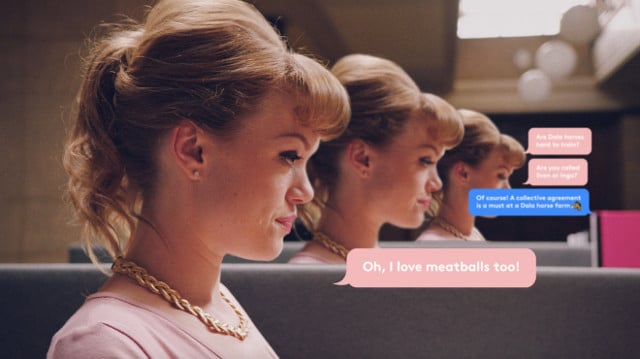 Even robots like meatballs, according to this Swedish video. Photo: TCO

In principle, a video about the “Swedish system for industrial relations” may not sound like a recipe for an instant internet hit, but the Swedish Confederation of Professional Employees (TCO) has pulled it off, managing to chalk up over 113,600 Youtube views for a video on that very subject in the space of 24 hours.

The video set in the near future shows a variety of artificial intelligence equipped robots banding together and forming a union, then demanding benefits like a retirement plan and Sweden’s famously generous parental leave.

Judging by the steady flow of Youtube views, it’s a hit. Asked why, TCO project manager Per Karlberg told The Local he believes it’s “a combination between the fascination with AI and the humorous tone”.

“We can all relate to the bots in the video. Of course they should have some breaks and go for a vacation every once in a while! Another factor is that viewers from outside of Sweden find the Swedish work environment pretty unreal – is it really possible to get parental leave, six weeks’ vacation and a retirement plan? Yes it is, and we have the ‘Swedish Part Model’ to thank for that,” he added.

For anyone wondering what the “Swedish Part Model” is, according to TCO, it's another term for the “Swedish system of industrial relations” which they thought would be “less nerdy sounding”.

TCO’s Karlberg explained that the point of the video is to show that Sweden’s “system of industrial relations is future proof and will take care of the changes in the Swedish labour market, even the ones expected in the fourth industrial revolution”.

The fourth industrial revolution, also known as Industry 4.0, described the trend of emerging technology breakthroughs in fields like AI, robots and autonomous vehicles.

TCO has even gone as far as creating a real life version of the AI head of the robot union shown in the video, “Clever Botson”, and is encouraging users to interact with it. Clever Botson would rather talk about employment agreements than C-3PO and R2-D2. Photo: The Local's screengrab

So far, The Local’s attempts to stimulate the robot have only resulted in answers telling us it can talk about employment agreements, holidays, and other work-related issues. Clever probably isn’t the kind of robot you want to take on a wild night out.