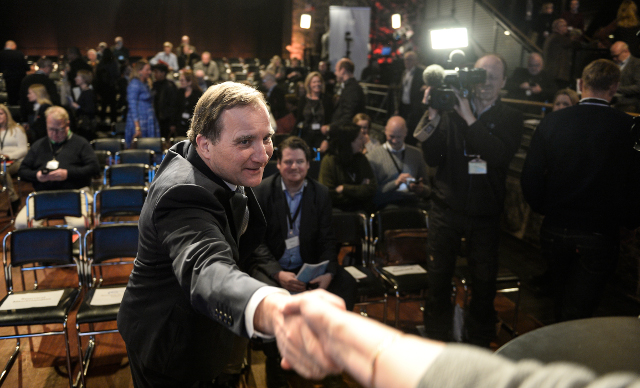 He spoke to the Aftonbladet tabloid just days after a heated debated which saw several experts and media commentators criticize Swedish author Katarina Janouch for claiming on Czech television that Swedes were learning to use guns to defend themselves as a result of increased immigration.

To Aftonbladet, Janouch later said she had “relayed her idea of how she views the development in Sweden, but it is consistent with what other newspapers write”, using the British Daily Mail tabloid as an example, which the Swedish embassy in London last year accused of running a campaign against Sweden.

Social Democrat leader Löfven, who is currently at the World Economic Forum in Davos, argued Sweden's image abroad was intact.

Addressing Janouch's comments he said: “It is a person who makes, in my opinion, a very strange statement. There's great respect for the Swedish and Nordic model, that we combine productivity with equality, good working conditions for employees with productive and efficient companies, and a welfare that contributes. There is a strong confidence in that.”

It is not the first time international news reports about Sweden stir debate in the country, and former centre-right prime minister and former foreign minister Carl Bildt called such reports “troubling”.

“I haven't followed [the Janouch debate] at all, but it is clear that some very troubling images of Sweden have been spread. Especially when we made a U-turn in our refugee policy which was very dramatic. We had been on very high moral horses against the rest of the world for some time and then we turned around completely. That raised a number of questions about stability,” he said.

READ ALSO: No, Sweden has not banned Christmas lights

“I don't think one should overstate the risks, but it is important that we conduct politics that's coherent in the long run. We are a small country that has become very prosperous, mainly because of our successes in the world, it's our foreign trade, our success in the world markets and our skills and competitiveness. That makes both the presence of Sweden in the world and our image important,” Bildt told Aftonbladet.