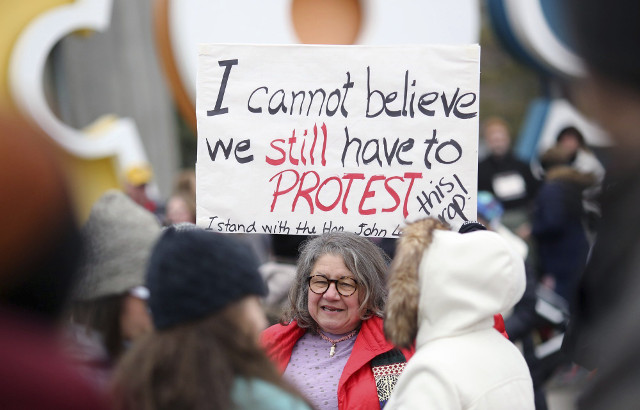 A woman protesting in Columbus, Ohio ahead of the Women's March on Washington. Photo: Brooke LaValley/AP

What was originally conceived as a domestic effort in the US to take a stance on the negative rhetoric around women, immigration and climate change in the 2016 presidential election has grown into a global grassroots movement seeking to express a collective view in favour of human rights.

The marches will take place the day after Donald Trump’s inauguration as US President, but they are not about expressing anti-Trump sentiment, the organizer of the Stockholm Women's March told The Local.

“The Women’s March isn't anti-Trump. The election in the USA, their political process and who they choose is a separate issue. We don’t need to accept the values he stands for however,” Lotta Kuylenstierna said.

“I personally believe that if Trump is allowed to fully air his opinions and no one holds him back it could lead to devastating consequences. He is also the leader of a party which stands for political regression. We need only read Twitter for us all to understand what his views are about. What the party represents is more hidden, because Trump's silly statements take up all the attention,” she added.

One of the key goals is to show support for women in countries where they are more vulnerable than Sweden, the organizer explained.

“I am happy to see that we are supporting women in vulnerable countries and through the large number of participants, influencing those we elect politically, as well as making the voices of women so much stronger that their issues cannot be ignored.” So far 4,000 people have expressed interest in attending the Stockholm Women’s March on its official Facebook page. Participants will leave from Norrmalmstorg in the city centre at 2pm local time on January 21st then end at the US embassy.

Comments have been left by Americans on the Stockholm event's Facebook page expressing their gratitude, including one by Eric Mascara, who wrote: “As an American social worker who will be in Stockholm this weekend, it warms my heart to know that so many people in the States and abroad are coming together in solidarity.”

Some, like Janne Nilsson, argued however that there are “clearly bigger and more important problems at home than Trump and the USA 1000000000 miles (sic) away”.

Organizer Kuylenstierna accepted that the challenges faced by women in the US are different to those in Sweden.

“We are on a completely different plane and we don’t need to fight for the right to abortion, for example. Sweden can however emphasize that his (Trump’s) approach is not in line with the relatively progressive Swedish values we have here,” she noted.

The Women's March is not affiliated with a political party. The Stockholm event's partner organizations include the Swedish Association for Sexuality Education (RFSU), Planned Parenthood, Greenpeace and Amnesty International.

It is not the only demonstration planned in the Swedish capital on Saturday. Democrats Abroad will also invite Americans in Sweden to voice their opinions on the new US administration at Södermalm’s Medborgarplatsen from 1pm.