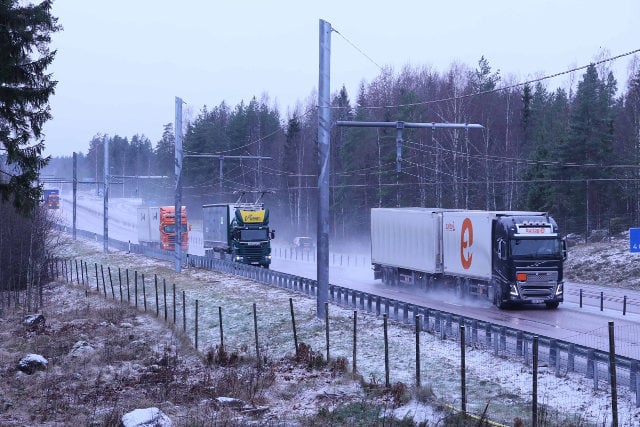 The two kilometre electrified stretch of the E16 road is being used to investigate the feasibility of replacing heavy vehicle traffic with a more environmentally friendly alternative, and with local transport companies expanding their number of trucks running on the route, it's going well.

But how does the road work? By taking tech that is more than a century old, then combining it with modern developments in a feat of Swedish innovation.

“In principle, the infrastructure is the same as the 120-year-old tram or trolleybus technology,” Magnus Ernström, the leader of the project at Gävleborg council told The Local.

“The new part is hybrid technology for the truck, which makes it possible for them to seamlessly change power source during operation, as well as tech making it possible for the electric current collector to find and attach to the overhead lines even while driving at full speed, without the driver thinking about it,” he added.

READ ALSO: Has this Swedish startup crowdfunded the car of the future?

So unlike trams or trolleybuses, the vehicles using the electric highway can also run without being attached to its power lines. The idea is that the time spent attached to it is used to charge batteries which will then power other stretches of the journey, meaning an entire road network of overhead lines wouldn't be necessary.

“The thought is we could have electrical roads for uphill sections to power the car and charge its battery at the same time. While attached the car's battery would charge, then on flat ground it would be powered by its own battery,” Ernström explained.

“The trucks are just standard trucks fitted with a piece of equipment where the electric current collector sits. That’s connected to the vehicle’s electricity system – roughly in the same way that a mobile crane is powered. The road therefore doesn’t need any specially built trucks: the only requirement is that they can be powered by electricity.” The image of trucks as hulking, CO2 spewing behemoths could be one of the past if the technology takes off: despite their still formidable size, no emissions are created by vehicles while running on the route.

“You have to take the whole power chain into account, but provided you use environmentally friendly electricity from wind and water power as we do, there would be no emissions at all during use,” Ernström said.

“Powering vehicles by electricity is nothing new, but this is the first time electrical power for heavy traffic on a public road has been tried, and the first time it has been designed for long distance transport at highway speed.”