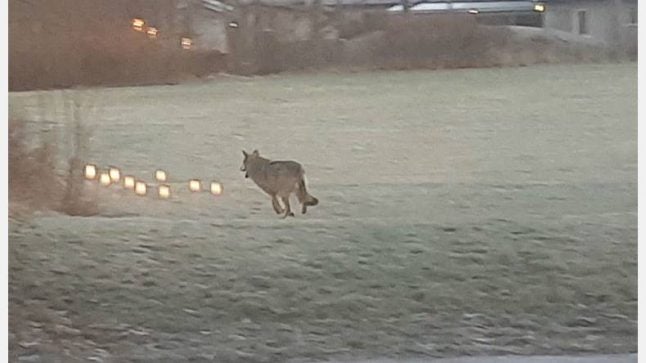 A expert confirmed that the animal Hanna Nilsson witnessed was a wolf. Photo: Tomas Nilsson

Tomas Nilsson began filming the animal, which soon ran around the house onto the lawn separating it from the nearby nursery school.
“It was fantastic to see a wolf so close, but at the same time it’s a little frightening to know there's one in our area,” Hanna Nilsson told The Local. “It’s lucky that there weren’t any children at the nursery school.”
According to Nilsson, Ljungsbro village is a popular place for young families to live, so a child could potentially have been at risk.
In the background, you can hear the couple's two-year-old son Melker saying “It's the Easter bunny!!!”.
According to Hanna Nilsson, he was remembering when the family had a hare outside their window last Easter.
Tomas Nilsson sent the video to a friend who is a keen hunter friend, who agreed that it was a wolf. A wildlife expert later confirmed this on regional TV news .
Östergotland county council has received several reports of wolf traces spotted in recent days, but according to Hanna Nilsson, this is the first she has heard of one being spotted.
“I’ve never heard anyone mention seeing wolves before in our area. It’s certainly not normal here.”
The story was first reported in the local Norrköping Tidningen newspaper.