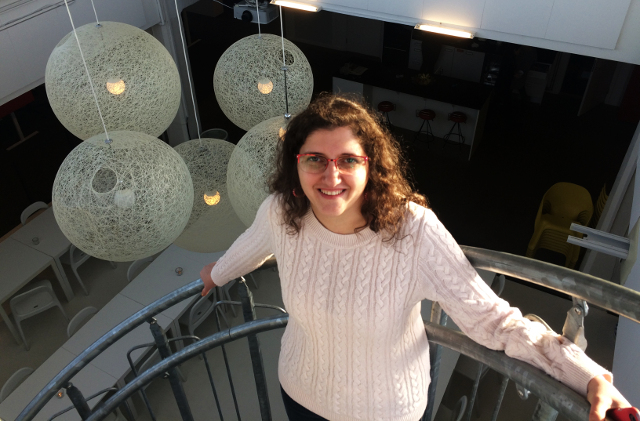 When Roula Bazerbashi finished her Masters in Tourism Management — which brought her from Syria to Europe in 2013 — and moved to join her husband, who was studying in Sweden, she was careful not to get her hopes up about finding work in a job market where more than one in five foreign-born are unemployed.

But thanks to a mix of fearlessness, luck, being in the right place in the right time, a love of talking to new people, hard work and talent, she landed her first job in less than a month.

“My husband was a singer in a choir and I went to their rehearsal. We were sitting at a dinner table and I was talking to a lovely lady, whose name was Ulrika Karlsson,” explains Bazerbashi.

“I told her I had worked as a marketing manager in Syria and was looking for a job.”

Her new acquaintance then turned out to be a human resources manager at Stockholm-based PR company Mynewsdesk and volunteered to try to pull a few strings.

It led to Bazerbashi meet Jonathan Bean, Mynewsdesk Chief Marketing Officer, who believed in her talent and offered her a three-month internship, which was soon extended and is now being turned into a permanent contract.

“When I first came to Mynewsdesk I was so impressed with their red colour because it's my favourite. And I was wearing a red shirt, so I thought 'I love this place',” jokes the 32-year-old. Today, she is an executive assistant for the CEO and works on a series of strategic projects for Mynewsdesk. The work itself is in many ways similar to what she did in Syria, but the company culture is completely different, with Sweden's famously non-hierarchical structures playing a big role.

“People in Syria and Sweden are both nice and helpful. What Sweden excels at is that talents are used in a very effective way,” Bazerbashi explains.

“In Syria it's a bit hierarchical. Here it's more of a flat organization. It's easy to sit with the CEO and have lunch and talk about your ideas.”

In the Swedish business and tech industry, English usually gets you a long way even if your Swedish is not fluent. But Bazerbashi is learning the language, and advises fellow internationals to do the same.

“It's important not just for work but for your social life within the company, just talking to your colleagues at lunch. Everyone is nice and switches to English when I'm around, but it's important to feel part of the company.”

But Swedish companies also need to give foreign workers a chance, she says.

“A lot of the foreigners coming here have really good talents and the companies need to be open for meeting people they don't know. For me it was not so difficult, and Swedish people are very nice and when you tell them what you're doing they try to help you.”

In the end, she says, it all comes down to not being afraid to talk to new people, whether you are a manager looking to hire someone, or a job hunter trying to get a foot in the door.

“I was pretty lucky and it was all about networking. Don't just send out CVs – that works too, but it is slower. Talk to people and take the opportunity to tell them what you are doing and that you are looking for a job – you never know who can help you.”