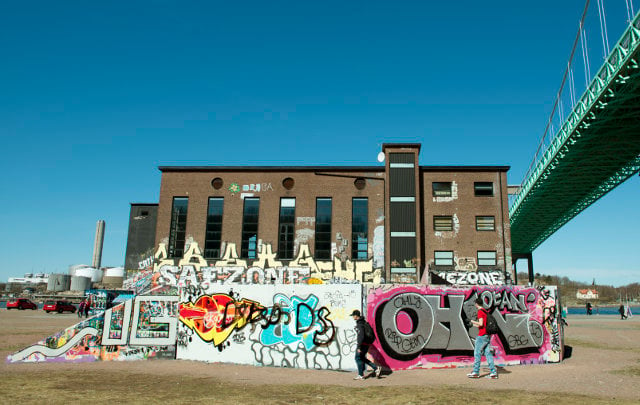 Stop us if you've heard this before: Majorna was once a working class neighbourhood, but thanks to its affordable living conditions, it started to attract creative types, and eventually, the hype that comes with them. Some claim the district is home to the largest number of musicians and artists per capita of any area in Sweden, and while that's almost impossible to prove (who's counting, and how?), it's true that people in creative fields seem particularly drawn to the area west of Gothenburg city centre, whether they actually live there or not.

Rikard Uddenberg, who owns a cafe in the area, claims that Majorna's hipsters are different to Stockholm's in that they “do the old Williamsburg thing and look like someone who was a roadie for Lynyrd Skynyrd in 1974”, compared to the capital's version, who “look like blacksmiths from the 1700s”. We'll let you make up your own mind. Did we mention that there's even a Swedish comic book character who is a hipster from Majorna?

Where would hipsters be without being able to blow money on expensive stuff? Majorna has the usual bases covered. If vintage is your thing (and if you're a hipster, it probably is) then Majornas saker från förr (“Majorna's things from the past”) is packed full of antiques and various retro items – expect mismatched porcelain tea sets, the usual fare.

Finally, no self-respecting hipster area would be complete without a record store or two, and Majorna boasts arguably the best in the country in the form of the huge flagship branch of Bengans, at Stigbergstorget. Packed wall to wall with vinyl, it may just be the biggest record store in Sweden, and with the shop housed inside an old cinema that still has its neon-fronted facade, it's definitely the coolest looking.

Where do real hipsters go to drink their precious coffee? Certainly not Starbucks or Swedish equivalents Espresso House and Wayne's. Unlike Södermalm in Stockholm, which contains all three, none of those chains are present in Majorna. At least not yet.

Instead, it's all about local institution Kafé Marmelad, which even uses the suitably hipstery slogan “the people's republic of Majorna” on its outdoor terrace. Then there's Café Kultur, which as the name hints, features artwork by local artists on its walls, and also puts on live music.

It's perhaps no surprise that Majorna is considered a breeding ground for creative types when you take into account some of the cultural hubs it boasts. Musikens Hus, a much-loved local music venue, counts the likes of weird Swedish psychedelic rock group Goat among its recent performers. It also has a great lunch buffet every weekday – a vegetarian one, naturally.

Down at the waterfront under the Älvsborg Bridge meanwhile lies Gothenburg's only legal graffiti wall, where anyone who thinks they're an artist can come and have a go at spraypainting their latest masterwork. The professionals are well represented too, with the adjacent Röda Sten centre containing a contemporary art exhibition hall and a performance art space. It also has a restaurant with a popular brunch buffet. A vegetarian brunch buffet. As if you needed to ask.

If hipster spotting is your thing, then there are two main events to look out for in Majorna every year. The first is the Majorna Megaloppis, on the last Sunday of May, where virtually every street in the area turns into a huge openair flea market.

If there's good weather as there was last year then as many as 100,000 people descend on the place, many of them sporting beards, coincidentally or otherwise. Along with a mixture of vintage goods, junk, records, and perhaps even the odd bargain, people also sell homemade food.

Then, in August, it's time for Way Out West, Sweden's coolest music festival. While not technically held inside Majorna proper*, you could literally throw a stone from the Slottskogen park venue and make it land in the neighbouring hipster hideout, so we'll give it a pass. In case there was any doubt about their target market, the festival is entirely vegetarian, ISO 20121 sustainability certified, and even has its own alcohol free bar.

*It is part of the Majorna-Linné borough, though.