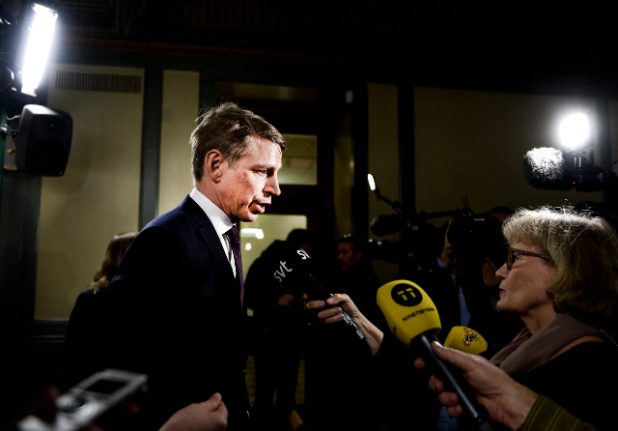 Per Bolund at the press conference on Thursday. Photo: Pontus Lundahl/TT

Prosecutors arrested the quartet on Thursday after police raids on the National Property Board's headquarters and the suspects' homes, seizing mobile phones and computers.

The National Property Board manages around 3,000 buildings in Sweden, 6.4 million hectares of land, and Swedish embassies in more than 60 countries. It is also involved in and shares responsibility for around 300 state-owned historic buildings and seven Unesco world heritage sites, including the royal family's home, Drottningholm Palace.

It all comes back to a former property manager working for the authority, arrested on suspicion of taking bribes and 'disloyalty of principal', or breach of trust, in 2010-2015. His wife is suspected of being complicit in the latter. They were both being questioned on Thursday afternoon.

Earlier in the day the minister for financial markets, Per Bolund, announced at a press conference that the government had decided to replace the board's director-general, Björn Anderson, with immediate effect.

“It is a serious development we're seeing on the National Property Board. The government has today decided that Marja-Leena Pilvesmaa will substitute as director-general from January 26th. The reason is that director-general Björn Anderson is involved in a police investigation,” Bolund was quoted by the TT newswire as telling reporters.

Anderson and another property director have now also been arrested, with prosecutors alleging they breached trust in 2011-2016, for “failing to act against a former employed property manager suspected of extensive crimes against the National Property Board”.

Broadcaster TV4 reported that the manager in question is accused of renting out buildings belonging to the Property Board to relatives and friends. It is also claimed that he used tax money to refurbish his privately owned summer homes.

According to the report, Anderson had known about the alleged misconduct since 2014, but a police report was not filed until two years later when TV4 investigated the case.

Bolund did not find out that Anderson was not only part of the police investigation, but that formal allegations had been made against him, until after the press conference ended on Thursday.

“It is of course very serious that a government agency director in Sweden is suspected of criminal activity,” Bolund commented to TT, who informed him of the developments.

“You are of course not convicted until evidence is established in court, but it is naturally very, very serious to be suspected of such a serious crime,” he added.

The news comes a day after Sweden dropped from third to fourth in an annual ranking comparing the levels of perceived corruption around the world, following alleged bribes and cronyism claims at several Swedish companies and government agencies.