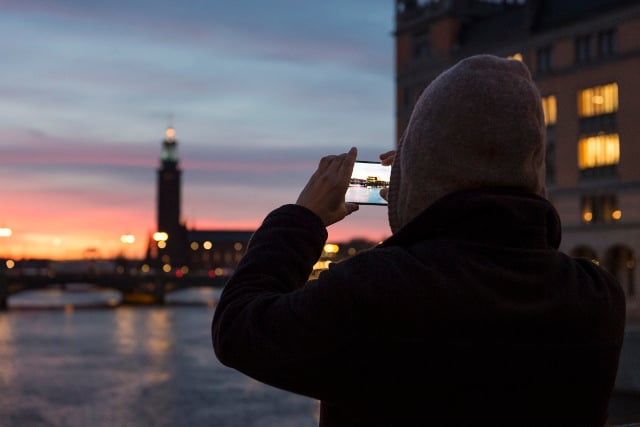 Stockholm's City Hall is one of the big tourist attractions in the Swedish capital. Photo: Stina Stjernkvist/TT

But with the growth rate slipping behind all but one of the other Nordic nations, there is a risk that rivals could catch up on the Swedes in the near future.

The number of foreign overnight stays in Sweden last year grew to 13.9 million, according to EU statistical office Eurostat – an increase of 3.1 percent on 2015. Denmark came second with 11.6 million, Norway third with 9.8 million, Iceland fourth with 6.8 million, and Finland last with 5.6 million.

The figures, based on a statistical forecast, show some clear trends.

One is that despite the growth, Sweden is at risk of slipping behind the likes of Denmark, Norway, and Iceland. Among the Nordics, the island nation saw by far the biggest percentage growth in tourism, with an 18.5 percent increase in overnight stays. Norway meanwhile also saw large growth, up by 11.4 percent compared to 2015.

Visit Sweden head Ösund emphasized that Sweden is still the most popular destination for foreigners in the Nordics however.

“In absolute terms we’re ahead of the other countries in the Nordics. If the interest in Nordic countries and Scandinavia grows, all countries will share in that,” she said.

Jens Heed, head of research at the Swedish agency for Economic and Regional Growth, is less relaxed. He thinks that there could be cause for concern.

“If the figure is correct, it’s lower than what we would have expected, if you also look at the growth in 2015,” he noted.

According to the stats, Sweden also had a larger share of domestic overnight stays in 2016 compared to the other Nordic nations. Only 25 percent of the total overnight stays in the country that year were made up of visitors coming from abroad, compared with 36 percent in Denmark, 30 in Norway and 28 in Finland.

“There is potential here that means we believe the figures could grow even more. Work on getting foreign tourism to grow more is important and a priority,” Ösund concluded.

Northern Sweden in particular is a region experiencing a tourism boom, its regional tourist board revealed earlier this month. The number of British tourists travelling to Norrbotten has doubled since 2010, while the number of German tourists has increased by 50 percent in the same period.

The chance of seeing the Northern Lights has likely helped – not to mention the famous Icehotel in Jukkaskärvi.