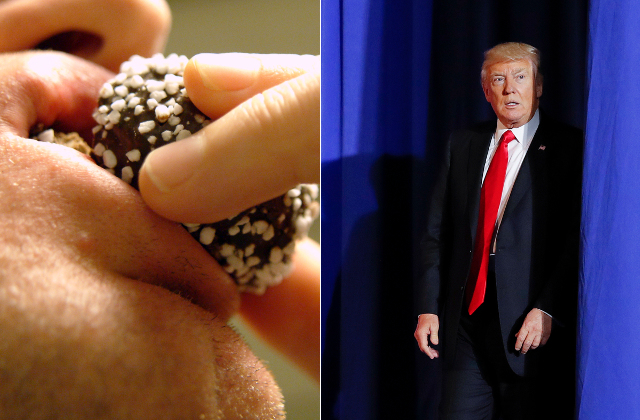 First some background information: US President Donald Trump has spent much of his first week in the White House arguing about the size of his inauguration crowd in his self-described “war with the media”.

“This was the largest audience to ever witness an inauguration – period,” his press secretary Sean Spicer said in a statement that countered all visible proof.

That was not a lie, adviser Kellyanne Conway insisted, creatively coining the phrase “alternative facts”.

Now, it has never happened to date that the internet has refused to pick up a gauntlet, no matter how tiny its fingers, and “alternative facts” quickly became the new meme of the week.

Swedish candy-maker Delicato is the latest to jump on the bandwagon (Which is the greatest bandwagon ever. It is so great. Nothing wrong with the size of that bandwagon).

Agency DDB Stockholm is behind the advert, which went viral in Sweden on Thursday and will also be published in major Swedish political magazine Fokus.

“After the White House went totally into bizarre world when mentioning 'alternative facts' in the press conference, we thought Delicato is one of the few brands that actually would dare to do a joke about that,” DDB Stockholm copywriter Petter Dixelius explained to The Local.

“Especially because Sweden just reached ten million inhabitants, we thought it would be funny to state that 13.2 million Swedes would eat at least one Delicato ball a day.”

“We have no further plans on 'alternative facts' right now, it is not a campaign, just one advertisement.”

Trump, a prolific Twitter user, is known for hitting back fast – and hard – at his critics. But on the off chance that the advert makes it all the way to the White House, Dixelius said that he was not scared about catching the attention of the American tweeter-in-chief.

“That would be the ultimate proof of success for Delicato,” he said.

They are not the only ones to mock the current White House administration.

Mid-Sweden University advised in a Facebook post that it would not accept “alternative facts” in essays or exams, jokingly thanking their “one million students, perhaps 1.5 million” for complying.