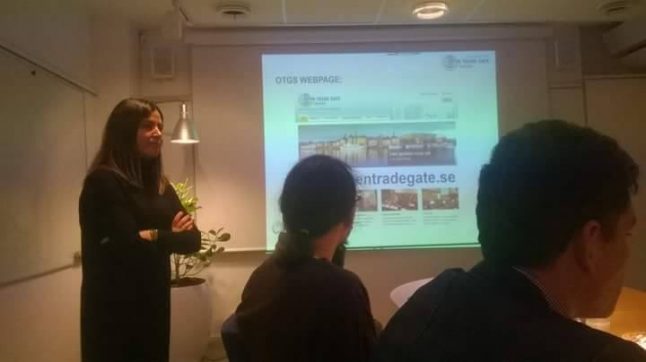 Students listen to a presentation at the National Board of Trade

On January 20th, 2017, the Swedish Institute opened a new season of study visits organized for the Network of Future Global Leaders (NFGL) and SI scholarship with a visit to two unique Swedish organizations: the National Board of Trade Sweden (Kommerskollegium) and Swedish Economic Crime Authority (Ekobrottsmyndigheten).

The National Board of Trade is the Swedish governmental agency responsible for commercial and trade issues relating to foreign trade, the internal market, and trade policy.

The board’s Open Trade Gate programme has as its primary mission to facilitate trade and increase exports from developing countries to Sweden. In addition, Open Trade Gate encourages foreign vendors to export their products to Sweden by providing them with useful advice for how to ensure their goods enter the Swedish market smoothly. In practice, vendors from developing countries who express commercial interest and are planning to expand their business activities in the Swedish market can contact Open Trade Gate at any time.

Within 10 days following such requests, exporters will receive exhaustive information about the following: product code, general customs duties, preferential tariffs, requirements for certificate of origin, quotas and import license, VAT rates, general requirements for all imports to the EU market as well as product-specific requirements according to Swedish legislation.

Basically, Open Trade Gate is the one-stop information platform that focuses on trade rules and regulations and provides information through “Export to Sweden” seminars targeting exporters.

These seminars are arranged by Open Trade Gate Sweden in cooperation with the foreign embassies in Sweden, a relevant organization in the host country, such as the official export promotion organization or the Chamber of Commerce, as well as the Swedish Embassy covering the country in question.

Such information is provided free of charge by highly-qualified specialists, as 80 percent of Open Trade Gate employees are lawyers specialized on commercial and trade law.

During the last 11 years, Open Trade Gate has received more than 2,000 inquiries and organized more than 90 seminars in various continents. Open Trade Gate collaborates with many partner organizations such as CBI (Netherlands), IPD (Germany), SIPPO (Switzerland, Finnpartnership (Finland) and the International Trade Centre.

Among other things, we learned about success stories involving supplies of meat and tropical fruits from India and African countries, as well as new business start-ups from Eastern Europe. It’s was quite impressive to know that the Swedish market of goods is really open for foreign producers from all over the world, no matter how big or small they are.

In my opinion, Open Trade Gate is a really unique programme, which allows all interested business people to be a part of a transparent European market, especially considering that these services are free of charge, thus really making them available for everyone. It also provides free legal and business consultation and a helpful business network of relevant Swedish producers and state authorities, all of which makes doing business more efficient.

During the study visit to Swedish Economic Crime Authority, NFGL members had an interesting possibility to get acquainted with activity of this exceptional organization. Two presentations were given, the first consisting of ageneral overview of tasks, functions, responsibilities given by Chief Prosecutor Stefan Lundberg and Senior Public Prosecutor Mikael Järetoft.

The second presentation, by Chief Prosecutor Stefan Lundberg, explained the organization’s crime prevention mission, including its cooperation with business sector of Sweden.

The Swedish Economic Crime Authority was founded in 1998 as a specialized authority within the public prosecution service to specifically fight economic crimes in Sweden. The main duties of the organization are to prevent, investigate and carry out legal proceedings against economic crime, which includes monitoring and analyzing criminal trends in business and commerce. Economic crime is an umbrella term and covers various types of crime. The two most common forms of economic crime are tax evasion and false accounting, which together account for 50 to 55 percent of all economic crime. The Swedish Economic Crime Authority consists primarily of prosecutors, police officers, auditors and other experts. Every year, it has an obligation to submit an annual report to the Ministry of Justice about its activities and achievements.

In order to perform its duties, the Swedish Economic Crime Authority cooperates with tax agencies, police, the enforcement administration, and prosecutor’s offices around Sweden. And if a crime goes beyond Sweden’s borders, the agency can also cooperate with similar EU institutions such as Europol. Eurojust, and OLAF – the European Commission’s anti-fraud office. In Sweden, however, economic crimes are treated separately and only staff trained particularly for those types of crimes have jurisdiction to investigate it. In my opinion, this increases efficiency and helps make Sweden such a good and transparent society, where companies understand their tax obligations and the negative consequences that come with illegal behavior.

The Swedish Economic Crime Authority presents the state’s case in court and as of now have won 95 percent of their cases, meaning that the “money”uncovered during the investigations was returned to the state budget. It would be very interesting to know the whole amount of those funds, but unfortunately the Swedish Economic Crime Authority didn’t have such a statistic.

The second part of visit was dedicated to group discussion and information about the Swedish penal code. Participants were divided into small groups and asked to share the main economic crimes in their own countries and present their ideas regarding its prevention in the future.

All five groups of participants indicated corruption as the biggest problem is their home countries and agreed that the best way to prevent such sort of economic crimes is educating young people so they receive a deep understanding of the importance of tax obligations and responsibilities to a country’s economic stability and welfare.

Our group included students from Ukraine, Moldova, Brazil and Uganda and we all agreed that corruption and money laundering were the biggest problems in our countries. We presented some key steps for addressing the issues, including the importance of teaching about economics and taxes in school and the elimination of nepotism in state authorities. We believed as well that the positive Swedish experience of having one specific state body in charge of investigating economic crimes can be also applicable and useful in our home countries.

In conclusion, I would have to say that these two institutions reflect simultaneously the state's indirect control and support for business development in Sweden, which allows it to reach a necessary balance of regulation. Overall, this experience can be very useful for other countries to follow in order to achieve sustainable economic development.