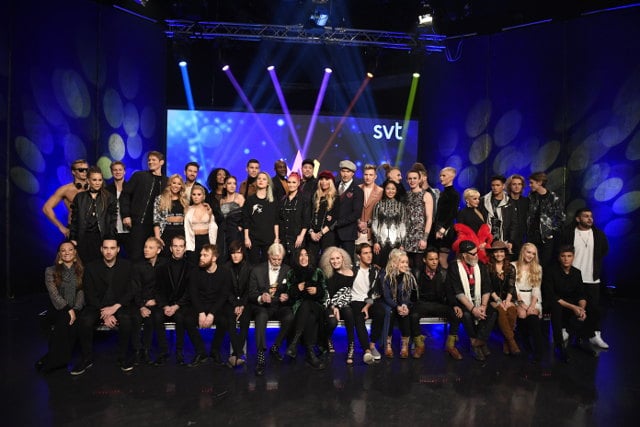 It's that time of the year again. The 2016 Melodifestivalen hopefuls. Photo: Jessica Gow/TT

In some countries the Eurovision finals aren't even a big draw, so it can be surprising as an international moving to Sweden to learn that even the qualifying process here is huge.

Melodifestivalen is televised from the semi-final stage onwards, and the final of the qualifiers was watched by a whopping 3.56 million people in 2016 – over a third of the population of Sweden at the time. That's only those who watched it on TV, and not online viewers via broadcaster SVT's 'SVT Play' platform.

For some further perspective: the final of Eurovision proper was watched by 3.68 million TV viewers in Sweden that same year. So almost as many people watched the culmination of the qualifying phase as they did the real Eurovision competition itself, which makes the importance and popularity of Melodifestivalen pretty apparent. With viewers comes voters: the winner of the Melodifestivalen final is partially picked by televoters, and boy do they like to vote. A massive 12 million votes were counted during the 2016 Melodifestivalen final (keep in mind that the entire population of Sweden was just under 10 million people at the time) an all-time record for the competition.

The fact that there is a rule in place which caps the maximum number of votes one person can make over the phone at 20 speaks volumes. A big part of Melodifestivalen is the staging itself, which seems to be getting more and more elaborate by the year. SVT only recently revealed the striking arrow-shaped design for this year's stage, causing an outpour of excitement and opinion on social media. And not just in Sweden.

BIG NEWS FROM SWEDEN
This is how the #melfest 2017 stage will be  pic.twitter.com/ESiT2CLmFs

The televised part of Melodifestivalen may start in February, but the process of reaching that phase in the first place begins during the previous autumn. Hopefuls are asked to submit their songs before a mid-September deadline, and from there they're narrowed down by a panel of judges and producers to a final cut of 28.

For the 2017 edition, songwriters knocked out 2,450 submissions to compete for a spot. That's down slightly from 2,478 in 2016, but still a lot of music. Speaking of Swedish songwriters and Melodifestivalen, here's a bunch you may know:

In Sweden it's common for performers to take multiple stabs at Melodifestivalen and Eurovision dominance, and this year is no exception.

Seemingly not satisfied with her 2012 Eurovision win (or perhaps just in need of something to do), Loreen is back this year with new song “Statements”. Another former winner making a return is Charlotte Perrelli (previously known as Charlotte Nilsson), who won Eurovision back in 1999, and Melodifestivalen again in 2008.

Then there's the eternal bridesmaid but never the bride, Roger Pontare, who has twice represented Sweden in the Eurovision Song Contest (1994 and 2000 respectively) without coming close to winning, yet still comes back for more. He also participated in the 1999 and 2006 Melodifestivalen, and is now back again in 2017.

Finally, watch out for shameless Swedish One Direction rip-off The Fooo Conspiracy, who are huge among teenyboppers in Sweden, and hoping to make an impact on the rest of the world by earning the chance to participate in Eurovision. We're really, really sorry.

With so much at stake it's perhaps no surprise that Melodifestivalen has attracted a few controversies since it started in 1959. In 2016 for example, Anna Book and her lyricist, Nordic Noir author Camilla Läckberg, were thrown out of the competition when it emerged that their song had already been used in Moldavia under a different name.

In 2009 meanwhile, Swedish boyband EMD were threatened with disqualification because they sang part of their song and showed off some of the dance moves during a press conference, breaking a rule that the songs should be kept top secret until they're performed live on TV. The horror.

Perhaps it's a sign of my Scottish cynicism, but one would expect something as overwhelmingly dominant in Sweden as Melodifestivalen to attract a sizable negative backlash, yet it's pretty difficult to find tangible evidence of that. An expression which may or may not represent the writer's feelings about Melodifestivalen. Photo: Richard Vogel/AP

Inevitably given its popularity, Melodifestivalen has a habit of drawing a comedy entry or two, as exemplified by Swedish comedian Sean Banan, who made it to the final with his oh-so-hilarious “Copacabanana” in 2013. As one Youtube comment on the performance said succinctly, “what the hell did I just watch?”

This year, the comedy entry honour goes to quarter De Vet Du, who to their credit, have chalked up millions of views on Youtube with their distinctly Swedish brand of humour. They'll attempt to be crowned kings of Melodifestivalen with new song “Road Trip”. Here they are imitating some of the kind of folks you may just see on a night out in Stockholm's yuppie district Stureplan. Perhaps.