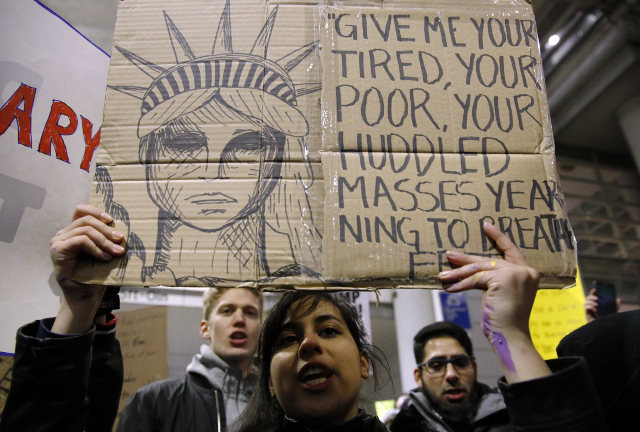 As a Swedish Iranian, I am furious. I studied in the US for three years at university, my parents spent thousands of dollars there for my education, and I spent countless hours poring over study notes, deepening life-long friendships and campaigning with a student gun control group to help keep fellow students safe.

Mostly, I’m angry on behalf of people like Raya Bidshahri, a 21-year-old Iranian student who worries that her family cannot travel to America to see her graduate. Then there’s Muhamad Alhaj Moustafa, a trainee doctor who fled Syria after the civil war started. The executive order was signed while his Syrian wife was in the air, and she was deported after she arrived.

Or Nazanin Zinouri, an Iranian Clemson University graduate and data scientist living in South Carolina who was left stranded in Dubai being told she could not board a plane to Washington. She has lived in the US for seven years.

She said in a post of Facebook, “No one warned me when I was leaving, no one cared what will happen to my dog or my job or my life there. No one told me what I should do with my car that is still parked at the airport parking. Or what to do with my house and all my belongings.”

I could go on and on. The stories are endless, heart-breaking and maddening. As a journalist, I am told I need to always stay impartial, always be objective. But this is personal. I cannot just watch impassively while a five-year-old Iranian boy and US citizen is detained for hours, away from his worried mother, because the US government thinks he may pose a “threat”, according to White House Press Secretary Sean Spicer.

The indefinite ban on Syrian refugees is the most repugnant part of the executive order. Turning away an entire group of people, desperately fleeing their war-torn country and looking for a safe haven is not the act of a brave or thoughtful government. That is what you call cowardice.

In Britain, where I live, the reaction has been extraordinary. Thousands of people protested outside 10 Downing Street and across the country on Monday January 30th in response to what people are arguing is Theresa May's seemingly indifferent response.

READ ALSO: 'I'm one of those people who don't know where they belong'

People cannot be banned simply because of who they are and this obsession with the 'special relationship' is useless if you cannot be honest with your friends.

I’m grateful to Swedish Foreign Minister Margot Wallström for making it clear that she thinks it is the wrong decision. I hope the Swedish government sets an example for the British, and stands up for their citizens and for Muslims as a whole.

Let’s be honest, this ban is deeply xenophobic. Former New York City Mayor Rudy Giuliani admitted as much while being interviewed on Fox News, saying the president asked him how to impose a Muslim ban “legally”. It does not protect the American people, and it will not change how terrorists such as Daesh (Isis) operate. This is simply a ban to create a scapegoat, a distraction from all of Donald Trump’s future failings. While real terrorists are laughing at the outcome, ordinary hardworking people are suffering.

I’m going to end on a cliché, but this poem, engraved on the statue of liberty in New York City, used to represent what I thought America was.

“Give me your tired, your poor,
Your huddled masses yearning to breath free,
The wretched refuse of your teeming shore.
Send these, the homeless, tempest-tossed, to me:
I lift my lamp beside the golden door.”