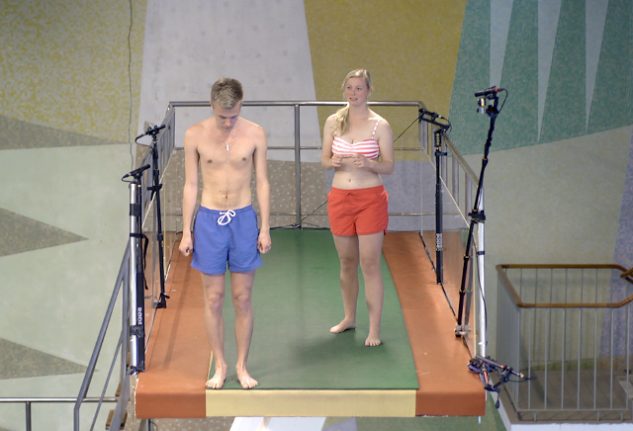 To jump, or not to jump? Photo: Maximilien Van Aertryck and Axel Danielson

The premise of short documentary “Ten Meter Tower” is simple: how will people who have never climbed the huge diving tower react once they are up there and have to choose whether to jump, or give up and come back down?

The relatable portrait of battling fear has struck a chord on an international level, being shown at more than 40 different film festivals across the globe, including the prestigious Sundance Film Festival in the USA.

“It was something of a psychology experiment. We sought to capture people facing a difficult situation, a portrait of humans in doubt. We’ve all seen actors playing it in fiction films, but we have few true images of the feeling in documentaries,” Maximilien Van Aertryck, one of the makers of the documentary alongside Axel Danielson, told The Local.

The duo have been making films together for five years, and take both a critical and humorous approach in their work. The film-makers have been thrilled by the reaction to Ten Meter Tower, which along with earning screenings across the world, has also been featured by the New York Times.

“The reactions so far have been overwhelming. We're very excited. It has been lots of fun to show the film around at festivals and it usually gets a lot of reaction from the audience,” Van Aertryck noted.

The film was shot at Gothenburg’s Valhallabadet swimming hall, a place with a name which conjures up images of the hall where brave warriors who die in battle are said to go according to Norse mythology. Perhaps inspired by the name (or more likely, the camera), the vast majority of those who climbed the mammoth tower chose to jump. Not for the faint-hearted. Photo: Maximilien Van Aertryck & Axel Danielson

“About 70 percent of those who climbed did jump. We noticed that the presence of the camera, as well as the social pressure from those awaiting their turn beside the pool pushed some of the participants to jump, which made their behaviour even more interesting,” the Swedish director explained.

The film-makers also took the plunge themselves, something Van Aertryck described as “frightening”. They have since moved on to a new project, a short film shot on the set of Swedish broadcaster SVT’s evening news program called “Studio 5”, which recently premiered at the Gothenburg Film Festival.