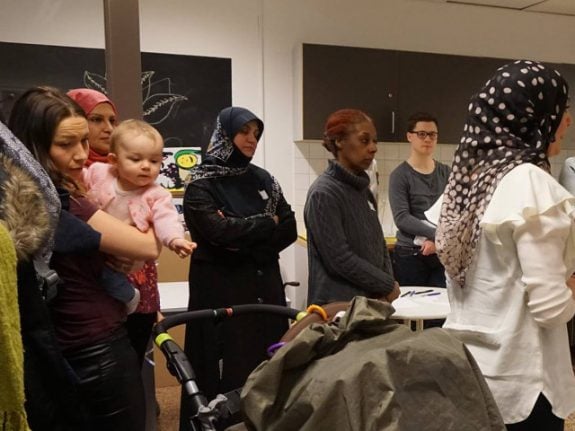 I’m 23 years old, and I have no plans to have children any time soon. Naturally, I was the perfect pick to go to one of the meetings held by “Svenska med baby“, an organization helping parents with children between the ages of 0 and 2 to meet other parents, and for non-natives to learn and practise some Swedish at the same time.

So, as I was travelling to an open meeting outside of Stockholm I had mixed feelings. As a budding journalist I was of course curious about the story, but at the same time I felt kind of insecure. Would I fit in with a group of new parents? Would the children cry at the sight of me? How would I react? Maybe I'd also start crying…

But as I arrive, I immediately sense the relaxed and open atmosphere. I start talking with both members and parents visiting the group.

“We just sit in a circle and talk about different themes and share joy”, Linnea Werlid, one of the organizers, says while a young boy tries to get our attention by clinging to her leg. She tells me the aim of the meetings is to give people from different cultures a place to socialize, and that she enjoys her job. The set-up. Note the lack of a young German in shot. Photo: Svenska med baby

I'm not the only one who doesn’t know what to expect at the meeting. Ksenia is from Estonia and came to Sweden with her husband and child three months ago. It's also her first meeting. She hopes to improve her Swedish and maybe even meet some new friends.

Next to her sits Emily, who has attended before and is now a group leader. She is from Sweden and particularly enjoys taking her daughter to the meetings:

She doesn't see herself as a “leader”, as her new title suggests, but thinks that she profits from the meetings as much as everybody else. Not the most intimidating bunch. Photo: Svenska med baby

As time goes by, I feel more and more comfortable, speaking to nice, open people and being smiled at by happy kids. “Wow, kids love me,” I think, just when my biggest fear seems to come true: a baby starts crying as I talk to his mother. She says he is hungry. I doubt it.

Thankfully the young fellow eventually cheers up as the parents and kids start singing Swedish songs together. I cheer up again too.

After a couple of Swedish songs and a small mingle with coffee and snacks, one of the young parents asks me the big question: “So, are you planning on having kids?”.

I definitely have no plans in that regard any time soon. I might consider it later in my life. Wherever I am by then though, I hope there is something like “Svenska med baby” to give me and my kid a chance to socialize and get in touch with different cultures from around the world.

Still, I take that question as my cue to leave the meeting and go back to my student life, for the moment.

COVID-19
EU approves use of Pfizer-BioNTech vaccine in children 12 and over in Europe
Url copied to clipboard!