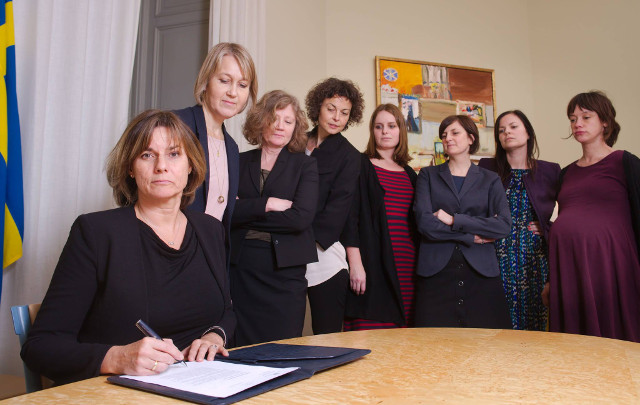 Lövin posted the image of her signing the proposal for Sweden's new climate law to Facebook and Twitter on Friday morning, and it has quickly started to spread on social media.

“Wonderful image. I hope you sent it to the man on the other side of the ocean,” wrote Kajsa Johansson in one of the most-liked responses to the image on Facebook.

Many of the people commenting quickly made comparisons with the now infamous image of Trump signing an executive order cutting funding to health groups which advise on abortions, surrounded by a group of administration members and advisors comprised entirely of men. Asked by The Local about the striking resemblance with the other image, Lövin said in a statement:

“We are a feminist government, which shows in this photo. Ultimately it is up to the observer to interpret the photo.”

In her image, Lövin is flanked by state secretaries, press secretaries and coordinators from her office.

The reason for taking the image is to show that Sweden is prepared to take leadership on climate issues, the Climate Minister explained.

“There is a global demand for climate leadership. I want to show that Sweden is ready to take that leadership. The new climate law that was announced yesterday marks a new era in Swedish climate politics.

Trump, an open climate change denier, has previously pledged to “cancel” the Paris climate agreement, an historic accord initially agreed upon by around 200 countries including the US in 2015.

On Thursday, Lövin spoke to The Local about Sweden's proposed new cross-party backed climate law, which will bind future governments to make an effort to achieve an ambitious target of Sweden producing zero net greenhouse gas emissions by 2045.

“We've set the goal that there should be zero net emissions by then, and all future governments would have to report on how they'll meet that goal,” Lövin explained.