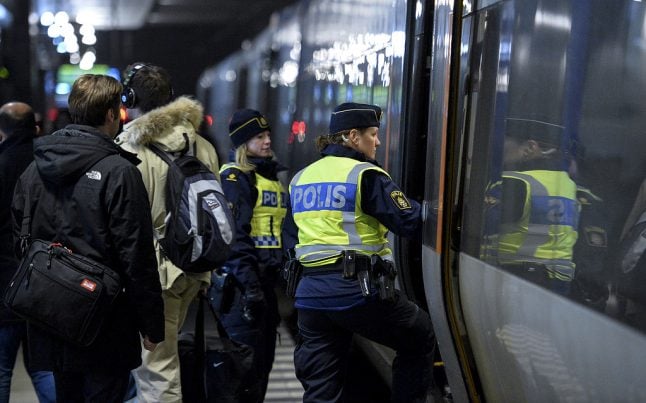 Swedish police outside an Öresund Bridge train at Hyllie station, Malmö. File photo: Johan Nilsson/TT
The Danish Ministry of Justice has confirmed that it will allow Swedish police to board Öresund Bridge trains at Kastrup in Copenhagen.
The Swedish officers will be obliged to wait until the train has crossed the border before carrying out checks, giving them approximately five minutes to complete the task before the train arrives at Malmö's Hyllie station.
While Interior Minister Anders Ygeman has welcomed the move, criticism from commuters remains.
“I am willing to continue discussions with Denmark for the convenience of passengers, but this is a very significant step,” Ygeman told news agency TT.
The measure will save time, thereby improving conditions for long-suffering commuters travelling across the Öresund, said Ygeman.
“I hope that they will be pleased that we have made a big improvement to the commute by going back to the [pre-ID check] timetable, and we are prepared to make further improvements to make their lives as easy as possible,” the minister continued.
Ygeman told TT that his ministry aimed to bring services back to normal after “a discussion with operators”.
Internal temporary border checks were introduced in Sweden in November 2015 amid a spike in asylum seeker arrivals in the country. I.D. checks, which are the responsibility of rail, bus and ferry operators, were brought in on the Danish side of the border on 4th January 2016.
How much longer commuters will continue to pass through I.D. checks on their way to work remains uncertain, Ygeman told TT.
EU policies on maintaining border control and agreements on joint responsibility for refugee policy are likely to affect the long-term prospects for the border checks.