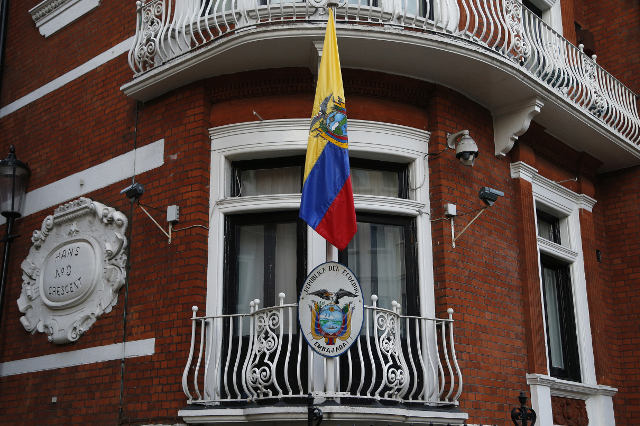 Julian Assange is still at the Ecuadoran embassy in London. Photo: Frank Augstein/AP

WikiLeaks founder Julian Assange made a renewed plea on Monday for Sweden and Britain to respect a United Nations panel ruling that said he was being arbitrarily detained.

“I call on UK and Sweden to do the right thing and restore my liberty,” Assange said in a statement, issued on the one-year anniversary of the ruling.

The 45-year-old founder of the secret-spilling website has been at the Ecuadoran embassy in London since 2012, having taken refuge to avoid being sent to Sweden where he faces a rape allegation that he denies.

He fears Sweden would extradite him to the United States over his website's leaking of diplomatic cables and other classified documents.

Assange said Britain and Sweden were in breach of their international obligations under the Universal Declaration of Human Rights.

In February 2016, the UN Working Group on Arbitrary Detention found Assange was being “arbitrarily detained” by Britain and Sweden, a decision it reaffirmed in December following an appeal by the British government.

“Julian Assange is not, and has never been, arbitrarily detained in the UK,” Britain's junior foreign minister Alan Duncan said in a statement at the time.

Last month, Assange said he was willing to travel to the US to face investigation after one of WikiLeaks' main sources, Chelsea Manning, was given clemency by then president Barack Obama.

But he said he would only do so if his rights were “guaranteed”.