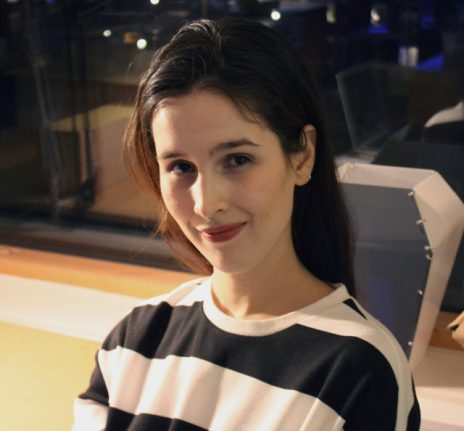 Italy-born Greta Mabilia has started a foray into PR as well as studying sustainable design in Sweden. Photo: Greta Mabilia

Originally from Marostica, northern Italy, Sweden has been on the agenda for Mabilia since childhood. Born to a half-Swedish father, as a child she decided that she wanted to move there, so it was simply a case of finding the right university. Which is how she ended up at Linnaeus in Växjö.

“I come from an art background, which is why I picked the design part of my course, but I’ve always been interested in sustainability,” she explained

“I started out with the standard things in Italy: picking up trash, working out how to have less waste at home. But the program broadened my perspective.”

The program is “Design + Change”, which claims to be the first international design program focusing on sustainability in Sweden. Students come from as far as South Africa, Canada and the US, with many saying that it was the only program they could find focusing on social sustainability. Confused as to what that means? Here's Mabilia's explanation:

“It means we shouldn’t just be sustainable in recycling, but also sharing knowledge about how to do things in sustainable ways and interacting with each other in a more constructive way. That’s the base of any successful and sustainable practice.”

“We have been asked to be as international as possible. We have always tried to celebrate the fact that we are all international students, so we are trying to make projects that can be applied in many different places,” she adds.

Soon, the Italian started a two-month internship at her university's “Sustainability Office”. It wasn’t part of her course – she had to fight hard to make it happen.

“Some of my classmates and I really wanted to do an internship, so we worked really hard to get that opportunity. They want us to develop a project analyzing power relationships. So in places like a university, how do people who work there and students interact?

“We have to develop the communication that goes on, mainly between Swedes and international people who don't speak Swedish. We want more participation from the international side.”

In her experience, Swedish universities are not only useful in terms of the education they provide, but also in the assistance they offer when it comes to navigating tricky aspects of society.

“Universities give a lot of help here, in terms of tax and how to get your personnummer (personal number), and issues that aren't really school related. Once you solve those things it's much easier to live,” she advises.

Not content with studying and an internship, the proactive 22-year-old has also launched a number of projects focusing on food sharing – a growing movement which encourages saving and distributing surplus food instead of wasting it – starting with a website, then continuing with a design project and Facebook page.

“I noticed how, since all the students here are international, they come for just six months and when they leave, they leave a lot of food behind. I was thinking: how can I solve this for sustainability purposes as well as economically, for people not to waste their money?” she explains.

“I created the food sharing site during the summer, but I never really made it as active as I wanted. At university we had a module where as an experiment we tried to live without money for as long as we could. I thought 'now is a great time to make this work!', and things started rolling. In the future I want to make it official, register it as an initiative outside of the university and get it advertised in a more official way to more people.”

Along with her sustainability-related work, Mabilia has also started a foray into the world of public relations. She was recently tasked with the PR for her university program's exhibition at the Stockholm Furniture and Light Fair. It was the first time she had handled PR for an event of that scale, and it appears that the Swedish take is different to the Italian approach.

“We have to romanticize less about what we write in Sweden, because if we were in Italy, it's more passionate and informal in a lot of situations. Here, Swedish people prefer to have direct information about what’s going on, then decide upon that, without romanticizing it,” she observes.

“We were working on a budget and had to represent our university in Stockholm. We've done a lot: learned how to communicate officially with the press, people who may be interested in coming, sponsoring us, financing us. Created relationships and advertising through social media. It has been a jump!” she adds.

Even the PR work is approached with a sustainable mind-set:

“We are trying to be as paper-free as possible, as most of it is done on social media. The only thing we printed were some brochures.”

And that's quite the contrast to her native Italy.

“In Italy, being non-sustainable is something you don't need to be ashamed over. Where I come from, it's cool if you throw your gum on the ground. Here, it's more accepted to be sustainable. My program would be harder to do in Italy. In Sweden we can afford to be pioneers in new ways of sustainability.”

Mabilia clearly feels at home in Sweden, but not everyone is as confident about throwing themselves into a new culture, head first. So what's her advice for anyone considering launching a career in Sweden, but hesitant about taking the leap? Don't believe the stereotypes.

“People are much kinder than the stereotypes. So many people say Swedish people are cold and don't interact, but I’ve found that they will gladly help you.”

“It can be harder sometimes to connect with people because of cultural differences, but in the end, it really pays off. I find that if you're good at something and earn respect in your field, people trust you. In other countries, it's more about who you know,” she concludes.