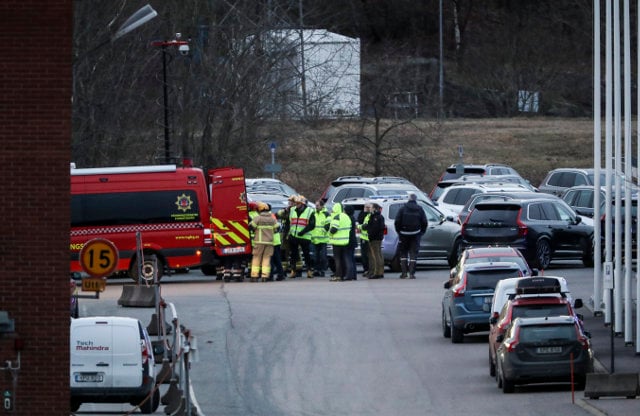 Emergency services at the scene of the fire in Gothenburg. Photo: Adam Ihse/TT

“There are no injuries; everyone in the building at the time of the fire has been evacuated safely,” a spokesman for Volvo Cars told AFP.

“The fire has been contained to a single building, (it) is under control and is being extinguished by the fire department,” the spokesman said. Production was not affected by the fire, he added.

The fire has been contained to a single building and is still being extinguished by the fire department. There is no impact on production.

Described in local media as a “violent fire”, released images showed smoke coming out of the Volvo factory's roof in Torslanda, a remote area in Gothenburg.

Six fire stations and 40 firefighters were dispatched to the scene, local relief services said in a statement. A 30 metre area of the building was damaged by the blaze.

By 17:30 local time emergency services had extinguished the main blaze, but spent several further hours putting out smaller fires in the walls and roof structure of the building, eventually leaving the scene at 21:00.

Volvo Cars split from the Volvo Group in 1999.

They shared the same industrial premise at Torslanda until Volvo Group moved to Lundby located in another part of Gothenburg, early this year.