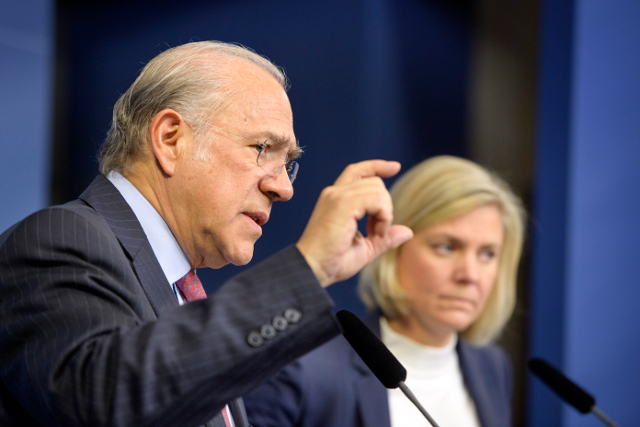 The economy is growing

The Swedish economy is performing well, according to the OECD report, with economic growth bringing down unemployment (although it remains high among foreign-born). As The Local has previously reported, the government expects Sweden's GDP, the main indicator used to gauge a country's economic well-being, to grow by 3.4 percent this year.

“Sweden is outpacing major advanced economies, including Germany and the United States, as well as its Nordic neighbours,” said OECD Secretary-General Angel Gurría in a statement released as he presented the report in Stockholm on Wednesday. “Bucking the global trend, productivity has picked up. Unemployment is receding, and Sweden has a higher employment rate than any other EU member state.”

But income inequality is also growing

Although unemployment is low overall, it is growing among foreign-born residents. The OECD report warns that Sweden must act to contain growing income gaps. “Income inequality rose more rapidly than in any other OECD country since the 1990s, albeit from a very low level,” reads the report, arguing that the lack of affordable housing on Sweden's heavily regulated rental property market has worsened inequality. Housing prices have soared in the past years, and in many cities people wait years for a first-hand contract.

It has been argued that Sweden may be losing the leader's jersey in the gender equality race, but the OECD states that it remains far ahead of most countries in the world. “Women have a high employment rate, outperform men in education and are well represented in government and parliament,” the report says.

However, it also notes that Sweden needs to work harder to get more women entrepreneurs onto the country's booming startup scene and more women onto private company boards and into senior management positions. Women currently take 75 percent of Sweden's generous parental leave, despite Sweden allowing mums and dads to split it equally between each other.

Sweden has seen record immigration in recent years, including a sharp increase in asylum seekers, which the OECD says “has created both opportunities and challenges”.

The report highlights the long wait for residence permits and high unemployment among foreign-born residents, in particular women. “Special attention should be paid to the integration of foreign-born women, who are particularly lagging behind,” said Gurría.

However, it is important to note that it generally praises Sweden. Even speaking about rising income inequality, Gurría told the press conference in Stockholm on Wednesday: “Everything in life is relative. If we could export the Swedish model all over the world, it would be a much better world.”

In a speech also published online, he said: “Sweden's economic achievements are impressive. Nevertheless, keeping momentum and implementing further change is always challenging. Sweden has the determination and the reform state of mind to prevail. As the great Swede August Strindberg once said: 'I find the joy of my life in the battles of life'.”