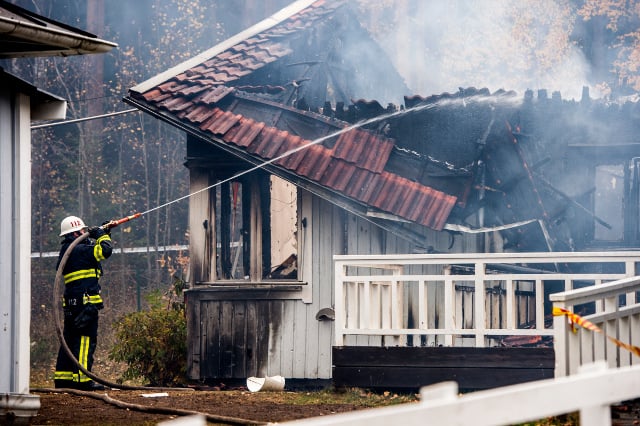 A fire at an asylum home in Sigtuna in October 2016. Photo: Lars Pehrson/SvD/TT

Of those, 20 fires turned out to be caused by accident or carelessness.

Police believe that 92 of the fires were started deliberately, 37 by residents in the homes. In two cases other suspects have been identified, but in 53 of the investigations the culprit is still unknown.

“We suspect that a large part of these 53 fires were started by third parties,” Ola Stoltz, a senior officer within Sweden's national police organization Noa, told SVT.

“In many cases we're talking about small fires. It could be anything from a waste bin on fire to, as in some cases, very serious fires,” he said.

“They are among the most difficult cases to investigate. That's why in so many of the cases we don't know who started them.”

Sweden scrambled to set up several new asylum homes after it took in a record 163,000 asylum seekers in 2015. The number has since dropped sharply and some of the homes are already being dismantled.

The Local and other media reported on several fires at asylum centres during this period. However, it is the first time official statistics are compiled, which means that it is difficult to draw any conclusions.

“We don't know for sure that the number of deliberate fires is increasing. The number of refugee homes also increased sharply at the end of 2015 and in 2016, which makes it even more difficult to make comparisons,” said Stoltz.