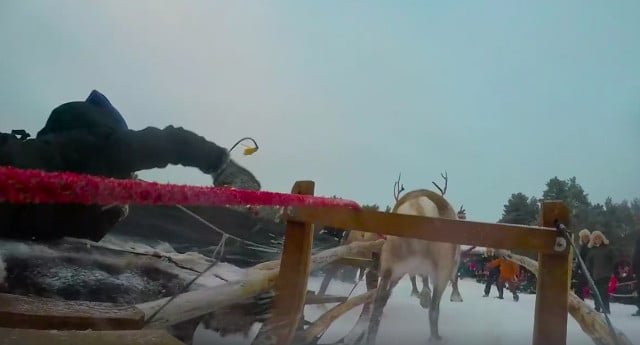 The small northern Swedish town has been hosting the indigenous Sami people's market every year since 1605, and these days it's a big tourist attraction. Not least for the race, where competitors are literally dragged by reindeer running at full pace, pulling their “rider” on a sled behind them.

This year, Jokkmokk local Andreas Viklund had the bright idea of using a portable GoPro camera to film his participation. The resulting video provides an unrivalled perspective of what it’s like to be pulled by a sprinting reindeer on a narrow track. Aside from actually taking part, of course.

“The basic concept is that it's a not-so-serious competition. In all honesty, participants are not really able to do anything to impact the outcome of the races. Other than hold on and make sure to not fall off the sled. The rest is up to the reindeer,” Viklund tells The Local.

Viklund is a former professional music producer who now blogs for a living. These days. he runs Doaivu Networks, which provides live broadcasts from the market through a Facebook page called Jokkmokk.live.

This year was his fourth time participating in the reindeer race, and while he didn’t manage to progress from the qualifying phase, he did get the coveted video footage he was hoping for:

“It explains what I mean when I tell other participants what to expect: don't try to see what's happening around you. Keep your head down, or it will hurt.”

He describes the ice and snow which the animals tear up from the track and into the faces of the racers as “pretty much like standing in front of the exhaust of a snow blower for 15-20 seconds”.

Sound scary? Put it this way: crashes are commonplace at the race.

“For a first-time participant it’s usually scary. You don't know what to expect, and once you see the speed of the reindeer you get a bit worried. There are crashes almost every year: flipped over sleds, people falling off, onto the side of the tracks, etc,” Viklund details.

The competitors clearly have a sense of humour about the whole thing. One of the sections of the track now has the nickname “The Winberg Corner”, Viklund explains, because Swedish politician and former government minister Margareta Winberg crashed twice at that part while participating a few years ago.

The injuries are usually minor though, according to the enthusiast, despite him ending up with a bleeding lip in last year's race “because of a flying ice chunk”. Anyone still keen to take part after that description should turn up next February for the 2018 race: a few spots are reserved for visitors each year.

For a different perspective on the same race, watch our editor Emma Löfgren's video of the spectacle below.